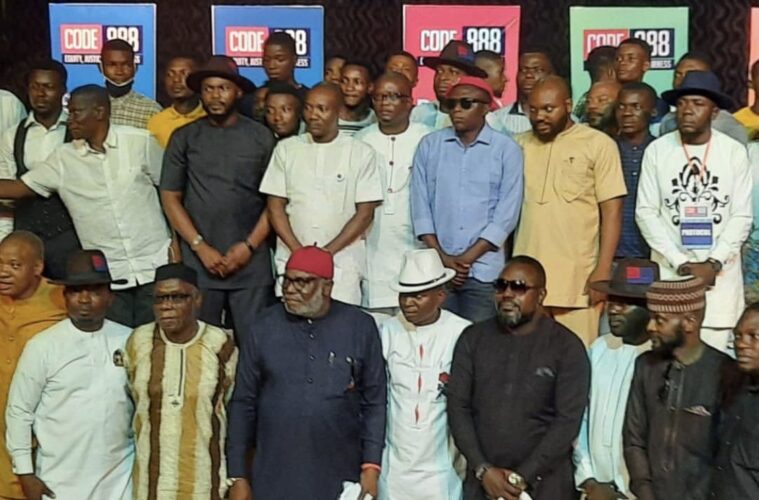 A political pressure group in Cross River State known as Code 888 has revealed that it is committed towards ensuring a peaceful transition of power from the Northern senatorial district to the Southern Senatorial district come 2023.

The Director General of the political pressure group known as Code 888 Comrade Maurice Nkong stated this at the main bowl of the Cultural Centre, Calabar tagged “BACK2SOUTH while flagging off campaign for the rotation and return of the position of Governorship and political power back to the south  on Friday.

He stressed and  preached the need for togetherness of Cross Riverians from the central and northern senatorial districts in support of the return of Governorship to the south and made known the readiness of code 888 to support a credible candidate from the south who will take over the Governorship position and be committed to the service and delivery of the interest of the state and Cross Riverians.

Speaking, the former PDP State Chairman airman, Ntufam John Okon applauded the vision the initiators of code 888 project group for working tirelessly towards ensuring the return of power to the south for a balance of equation in power structure to be attained in Cross River State.

The chairman of NYCN, comrade Dan Obo Jnr. appealed to the youths to remain resolute in supporting the Cross River state political structure that has been working for the state based on zoning system, while he made known the support of the youths of the state towards producing a Governor from the south that will continue on the industrialization and human capacity development legacies of the present Governor, Senator Professor Ben Ayade.

On his part, the Senior Special Adviser on political Affairs, Chief Peter Ojie advised members of code 888 to bring in visionary men who will be determined in the pursuit of  this goal of returning power to the south stressing that  only determination and critical approach to this project will earn them the BACK2SOITH project adding that he has always been impressed with the activities of code 888 and believes in their capacity to deliver just as they have always done.

Speaking earlier in his opening address, Great Ogban, the Deputy DG, South and convener of the Back2South campaign, welcomed everyone present saying “It is a campaign geared towards returning power to the South in Cross River.”

The Director General of CRISSA,  Mr. Effiom Effiwat reiterated that the people in the southern senatorial district are ready and have the qualified candidates with the administrative expertise and strength to function in the position of Governor as they have done before.

Comrade Modey Agbiji moved a motion for power to return to the south which was seconded by comrade  Jacob Ubana and supported by all members of the code and Cross Riverians present.

Comrade Friday Awade in his vote of thanks, admonished students, youths and Cross Riverians in general to support the noble course of returning power back to south and appreciated every body for their turn out to make the flag off colourful.