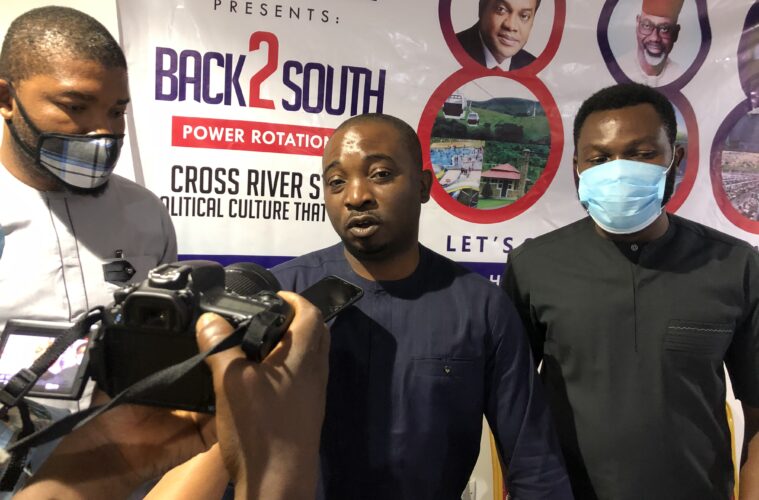 Code 888, a Political Pressure Group has launched a “Back to South” advocacy campaign in Calabar calling for the next governor of Cross River State to come from the Southern Senatorial District of the state.

Speaking on Friday during a press conference held in Calabar, The Director General of the group, Mr. Maurice Nkong stated that there is a political culture in the state and for the sake of Justice, fairness and equity, it has become Paramount that power is given to the South in 2023. According to him “As a generation, we stand for rotation of power and we will not worry about quality but the process. We have a political culture in Cross River State and we want it to continue.”

The DG added that the group which started in 2016 with the slogan ‘Equity, Fairness and Justice’ has been at the forefront in advocating for fairplay in the political arena of the state. He said “As a group, we work through consultations and advocate for natural justice. We have done consumption and majority of our leaders are in support of our course. We know how to mobilize ourselves. Code 888 is a political pressure group and we are engaging our leaders in all political parties. We have already put a Political party in place in case it did not go our way.”

On his part, the Deputy DG representing Southern District of the group, Mr. Great Ogban called on young people from both Central and Northern Senatorial District to support the ‘Back to South’ agenda by mobilizing support towards it’s actualization. According to him “Code 888 is a winning code in Cross River State and having enjoyed this orderliness over the years, we are saying that power should return to the South come 2023”.

He added that “For justice, equity and fairness and transparency, join hands with us and make this happen.”

On his part, the Deputy DG representing Central District of the group, Mr. Eja Elemi advocated for fairness in the quest for the next governor saying “I am standing on the capacity of Justice, equity and fairness. People agitating to come and struggle the governor happen to come from Central and I want to say it is not by might but by the will of the people. I want to urge us to remain good ambassadors of fairness.”

Also speaking, a member of the group and immediate State Chairman of the National Youth Council of Nigeria in Cross River, Prince Ndiyo described the fellowship the South has enjoyed over the years from others across the state as immeasurable and called for more support in actualizing the ‘Back to South’ campaign. He said “We want Cross River to remain peaceful in our political dispensation. We have qualified candidates from the South and all we need is the support of our brothers from Central and North. We are ready because we have the number, strength and energy.”

Another member of the group from the Northern Senatorial District, Mr. Ukor Brown pledged the support of people from the North towards the course saying “For the North, we are in full support of the South because we have noticed that Zoning formulate in Cross River has come to stay and we want the arrangement on ground to continue”.