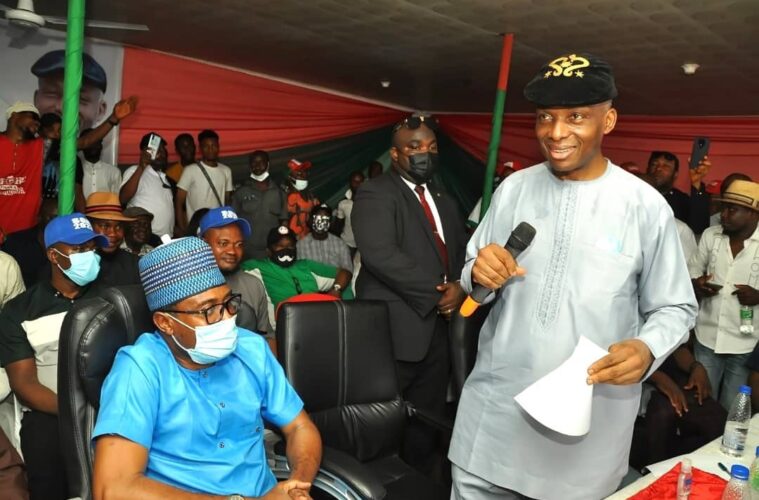 2023: Sen. Gershom Bassey Charges Party Excos To Stand By The Truth As He Celebrates Christmas With Them

The popular adage that a prophet has no respect in his home was recently challenged and proved wrong when the senator representing Cross River southern senatorial district and a gubernatorial aspirant in Cross River State, Senator Gershom Henry Bassey moved his state-wide train of supporters to the peoples democratic party state secreteriat in calabar, the cross River state capital, to formally wish the party state excos a merry christmas, while presenting himself to the state excos.

It is by no means an exaggeration to conclude that no single grain of pepper could drop on the ground if thrown, due to the unprecedented crowd that trooped out for the escortion of Obong ekpe as fondly called by his people, to the event that was just a christmas celebration between obong ekpe and the PDP state exexutives, and also a movement to revamp cross river state, leading to a complete shut down of the serene hue of calabar, throughout the duration of the event.

The state party secretary in a statement while addressing the crowd, stated that some days ago, the party had men that came to declare interest, but today when Sen. Gershom Bassey came, the crowd was duplicated.

Hon. Nelson ofem, member representing yakurr 1 constituency in the Cross River state house of assembly made it clear that no man ruleth by strength but by grace. He further charged the people to celebrate grace when they see one, as the grace to pilot the affairs of cross River state can only come from God.

Hon. Bassey Ewa, reassured the hordes of the peoples democratic party supporters in cross River state that it is time for the south, and stated that it was necessary for them to come out to celebrate with a man who is fit and ready to match any contender from any other party or senatorial district dollar for dollar and naira for naira.

However, Sen. Gershom Bassey in his speech told the teeming crowd of party faithfuls and party executives that it was time to once again rise to the challenge of sustaining the prevailing truth in cross River state and that the party and his executives remain the vanguard that should ensure that truth is maintained throughout the ideals of the current leadership of the party.

“As a founding member of the party, I understand the tradition, and understands that the partys foundation was built on truth and that even you mr chairman, emerged as party chairman because you always spoke the truth. Because you are a man who speaks the truth, the governor could not withstand you”.

The Senator further narrated how power rotated from governor Donald duke to governor Liyel imoke and then PDP zoned to the north. He reminded the party executives, that there was an agreement that power rotates back to the south in 2023

” When it was zoned to the north, did anybody from the south contest ?, mr chairman you were in that meeting, mba ikwueni you were there, you were even the chairman of that committee, i was there and any other person who was there should raise his hand.

He, therefore enjoined party supporters and stakeholders not to waver in their quest for truth as it is sacrosanct.

According to the Senator, ” in terms of capacity, no one running for governor in any party in this state has my capacity. In terms of vision, nobody can match the vision i have for cross River and cross Riverians. In terms security and infrastructure, nobody can match me, mr chairman, you must oragnaize a debate for all aspirants to show themselves”…

He further reminded the party excos that he only came with his supporters to say a merry christmas to them as he handed over four million in naira.

The party Chairman, Bar. Vena Ikem before giving his speech cheered the crowd with the partys anthem. He futher stressed that PDP is the only party that can ensure peace, equity and fairness.

According to him, his administration and team of excos are committed to winning elections and that elections are lost when aspirants are not treated fairly. He reassured the cheering crowd that himself and his excos will do the needful for the party to win elections and that is the only truth he has to say for now…

Entertainment was not ruled out as the christmas celebration turned mega rally also witnessed cutting of cakes, various traditional dances and cultural displays.. Venue of the event, PDP secreteriat at mary slessor avenue in clabar witnessed massive turnout of who-is-who in the politics of cross River state, including past and serving political office holders, captains of industry,student bodies, youth and women organizations, party faithfuls and the political class.