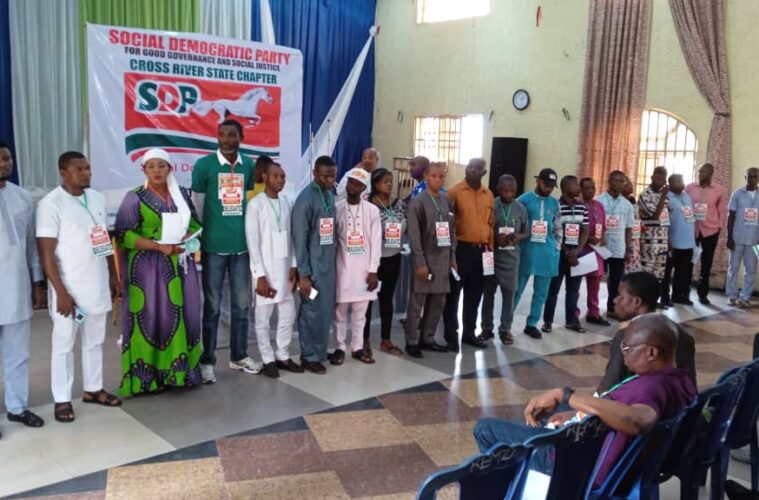 103 views
News0 Comments103 views 02 min read
The Social Democratic Party (SDP), Cross River State chapter has held its state congress to chat way forward as the 2023 general elections gathers momentum.
The congress which gathered party faithfuls across the eighteen (18) LGAs in Calabar, the Cross River State capital on Tuesday 19th April, 2022 witnessed votes for party Officers, administering of oath of office to newly elected officers among others.
Administering the oath of office to the elected members who will pilot the affairs and muscle the governorship seat in the state as well as the presidential seat, National Woman Leader of SDP, Alhajia Margaret Baturbo, charged the Excos to champion the course of the party in the state, adding that SDP which is one of the longest political party in Nigeria is not an underdog as the general elections beckons.
In an acceptance speech on behalf of the excos, the newly elected State Chairman of the party, Ekpenyong Ekpenyong Ambo, expressed gratitudes for the opportunity given to him to serve the party, promising to work harmoniously with his excos and deliver the party.
“I want to thank you all for your immense support to the party, and the huge privilege and honour accorded to me and my Excos, the responsibility of leading this great party at the state level. lt has certainly been a long contest and tussle judging from the 2019 elections. I sincerely appreciate you for staying through the turbulence as I believe that my entire team put together will deliver within their capacity your highest demand and discipline.
“The journey to 2023 and a new dispensation of Social Democratic Party (SDP) Cross River State Chapter has begun and I implore us all to join the moving train as we achieve success together. Through this leadership, we look forward to a successful outing at the polls come 2023 elections and beyond.
“As our mandate says ‘Social Justice’ we will not play politics with the short-term future of the state, we will work together to get it right as we revive, restore to the books a party and state worthy of residence at all times. Undisputedly, the party at the state level is faced with lots of challenges and difficulties, which within our reach shall reform, reorientate and handle all of these squarely to a reasonable progress. All in competitiveness shall be handled and channeled to the appropriate quarters when necessary.
“We all have a responsibility, as individuals, parents, families, businesses, party members, youths and everyone
across all levels, to play a positive role by bringing progressive and scalable values to enhance the growth of the party and state at large.
“I won’t do it on my own, I need all the support of every party member and the Excos of the party, as we make the Social Democratic Party (SDP) Cross River State Chapter better than it has ever been in the history of the state,” he ended.
He expressed optimism the party will not be shaken or intimidated by the oppositions.
Join the Conversation!