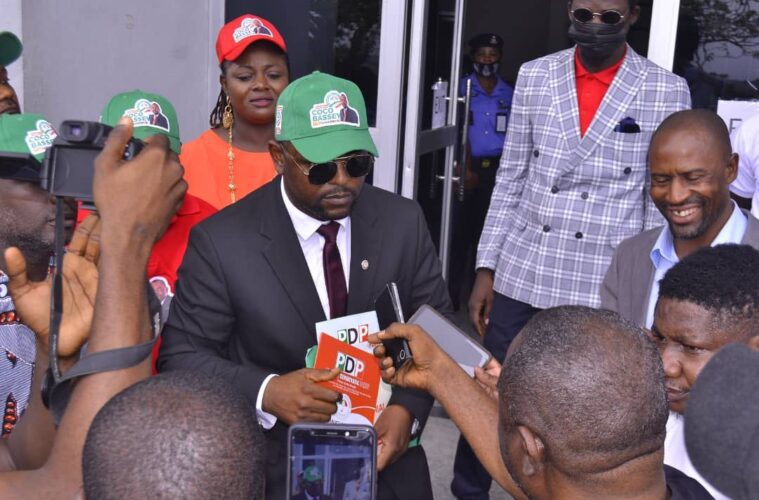 …we’re not yet mature to throw contest open, Coco-Bassey

A United Kingdom based engineer and youngest governorship aspirant under the People’s Democratic Party, (PDP), Engr. Mkpang Coco-Bassey has said if elected governor his administration would ensure the total development of small scale businesses and rejig struggling ones.

Coco-Bassey tagged his 2023 aspiration AHEAD which is an acronym for Action, Hope , Empowerment, Altitude and Development because he believes that for the state to succeed every individual must be carried along as everyone matters.

The 43 year old governorship aspirant who is the President Calabar Forum in the United Kingdom, said he joined the governorship race to make life of an average Cross Riverian easy by developing major sectors including education, health , infrastructure among others adding that his focus was on the ordinary man on the street.

Speaking with newsmen at the Margaret Ekpo International Airport yesterday before a large crowd of his supporters after picking his nomination and expression of interest forms, in Abuja said it was time to focus on people oriented projects and implementation of home grown policies that will lift people put of poverty.

His words : My administration will ensure that small scale businesses are properly developed and struggling ones boosted because Cross River is blessed with huge resources including individual with vast experience and capability.

“We need to support these set of individuals with basic amenities which is why we would rekindle the hope of our people by marching our word with actions, we going to develop the state’s educational sector , health and infrastructure that will in no small way bring about growth and development.

“We are going door to door to preach the gospel of AHEAD because we know that we possess what it takes to succeed” .

On zoning, he asserted that Cross River was not matured politically to throw the contest open and he is truly and deeply in support of zoning so that there can be equity.