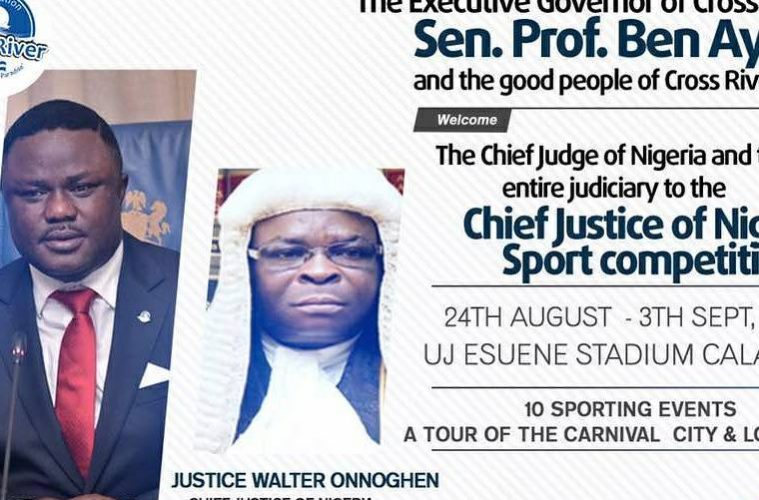 23RD NATIONAL JUDICIARY GAMES TO KICK OFF TOMORROW IN CALABAR

All is set for the 23rd edition of the annual Chief Justice of Nigeria All Judiciary Games for 2017 to kick off in Calabar, Cross River State from tomorrow, September 24th.

The Honourable Commissioner for Youth and Sports Development Comr. Asu Okang announced this on Monday while addressing newsmen in the state.

Comr. Asu Okang assured of the state government’s readiness to host the competition which according to him, some of the athletes were already in the various training pitch and more were expected to touch ground today.

He said “For us as a Government, His Excellency Sen. Prof. Ayade Benedict gave consent to the hosting of this event regardless of the considerable lean financial resources of the State. But we have decided as a matter of patriotism and mark of respect for our own illustrious son who is the Chief Justice of Nigeria, His Lordship Justice Walter Onnoghen who is also an indigene of Cross River State and His Excellency has directed that this game be hosted in Cross River State and that’s why we are here”. “We have engaged the various security agencies like the Nigerian Police, Quick Intervention Squad, Homeland Security and have already provided well comfortable accommodation which we bore the cost for all our dignitaries that are going to grace the occasion at the Transcorp Hotels and other logistics to see that the event runs without any hitch”  he added.

Over 1,000 athletes are expected to take part in the tournament, with restrictions to just members of the judiciary and well over 300 officials. In his remark, the Chairman of the LOC, Chief Emeka Ndili stated that about 19 States of the Federation and 11 Federal Courts and Judiciary institutions across the Federation have indicated interest to be part of the tournament with about 1,000 medals to be awarded to competitors.

The press briefing had in attendance members of the Local Organising, Hon. Effiom Effiwatt, S.A Sports and Co-Chairman of the LOC.

The games will be declared open by the Chief Justice of Nigeria, His Lordship, Justice Walter Onnoghen by 3:00pm tomorrow at U.J Esuene Stadium, Calabar.