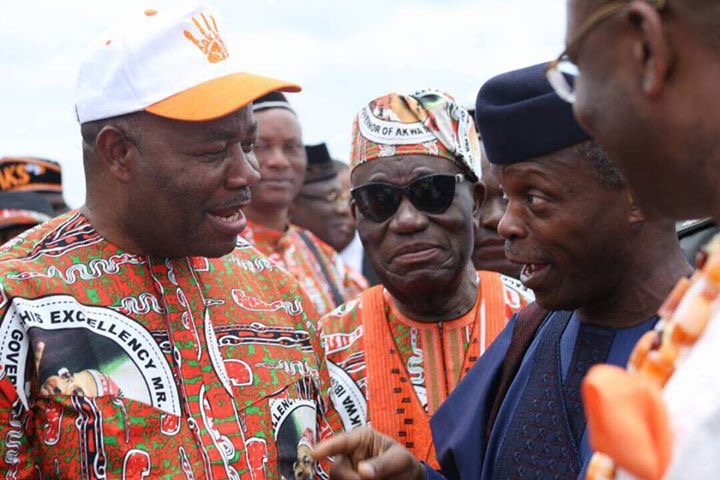 It was a harvest of spiritual blessings in Akwa Ibom State on Sunday, 24th September, 2017 during the thanksgiving service for the celebration of 30th anniversary of state creation, at the Uyo Township Stadium, as the Vice President of Nigeria, Prof. Yemi Osinbajo, prayed for God’s blessings upon the state.

Prof. Osinbajo, who was in the state since Saturday to commission three projects including the Jubilee Syringe Manufacturing (JSM) Company Limited, Metering Solution Manufacturing Services Limited (MSMSL), and the General Hospital, Etinan, said that part of their primary assignments as ministers of God was to bless people wherever they find themselves.

He congratulated Akwa Ibomites for the wonderful celebration of the 30th anniversary of the state which is named after the Almighty God, and particularly commended the wife of the governor, Mrs Martha Udom Emmanuel, for her great hospitality and generosity, including services rendered to women of the state. “I will take back with me your name ‘the Martha that Matters’.”

The Vice President said: “Thanksgiving is a great spiritual work and the rewards are immense indeed, that is why your Governor, Mr Udom Emmanuel, has taken the trouble to put this together so that we can all thank the Almighty God.

“I’m sure all of us know the story of the ten lepers in Luke 17:11, after they were healed by the Lord Jesus Christ. Only one of them returned and fell on his face to thank God with a loud voice. And Jesus asked ‘where are the other nine?’ Then Jesus said to him, go for thy faith has made you whole.

“The essence of all of that is, when people have leprosy, their limbs and fingers fall off. When you are healed of leprosy, it doesn’t mean that your toes, fingers, and limbs will be replaced. But for the one who returned to give thanks, the Bible says not only was he healed, but was made whole. In other words, he was restored completely. The fingers that had fallen off were restored.

Quoting from Isaiah 60:20-21 and Proverb 4:18, Prof. Osinbajo further prayed that “Your sun shall no longer go down; your moon shall not withdraw itself, for the Lord will be your everlasting light. And your days of mourning, the days of sadness has ended.

“But the path of the just is as the shining light, that shines more and more unto the perfect day. So it is concerning the light of God in your life. It will not stop today, it will shine brighter every day unto the perfect day. The Lord will help, support, be with you and establish Himself amongst you. As you have praised God, songs of thanksgiving will not seize from your homes and this state.”

The state Governor, Mr Udom Emmanuel, in his remark, noted that the difference between Jesus Christ and those who went for baptism was acknowledgement. “Others passed through normal rituals of baptism, but the Bible says in Luke chapter 3 that ‘Jesus Christ, waiting for Him to be baptised, while praying, the heavens opened.’ The difference comes from who acknowledges God.

“As a state, we must acknowledge God if we want prosperity to reach us. That is what makes the difference; that was what changed the genealogy of Jesus Christ from the son of Joseph to the Son of God.

“Today, we have come to thank God for the birth of our state, but in doing this, we should remember that every birthday celebrates the event, not the process. We should note that every good and perfect gift comes from God. The state is good and perfect because it is from above.”

The Governor emphasised that the reason God heed the cries of the people was to shower His blessings and love upon. “We should remember that we are men and women of honour as we celebrate our 30 years as a state.

“We are a chosen generation, a royal priesthood, a holy nation, a peculiar people; the only state named after God, the only people named after God Almighty – Akwa Abasi Ibom State – that we should show forth the praise of Him who called us out of darkness into His marvellous light. This is our challenge and duty.”

Governor Emmanuel charged all who stretch with bitterness in their hearts, and done wickedly against God and Akwa Ibom State to repent and join to build a greater future together. “Let us arise, shine for our light is come, and the glory of the Lord is risen upon us.

“I use this opportunity, as it has been preached, that wherever there was darkness in our lives, state and nation, by the risen of the Holy Spirit and the celebration of this 30th anniversary of the state, let there be light.”

Founder of the Christian Central Chapel International, Bishop (Dr) Emmah Isong, in his message titled ‘Arise, Shine for Thy Light Is Come’, said that the glory of the Lord is risen upon Akwa Ibom State, adding that Jesus is the light of the world, and that we don’t need to live in darkness because light has come.

“Whoever celebrates 30 years, 8 years follow. Anybody sitting in government when we are giving glory to God at 30 years, God promised to give the person eight years.”

According to him, the problem we have is too much complaint about connection. “The young man, when Jesus asked him if he believed he could be made whole, began to complain that he had nobody. Jesus did not say you need anybody. After this celebration, a feeling of inferiority is no more our identity.

“After Jesus healed the young man, people that had seen that man, began to complain. We need to be delivered from gossips, complaints, rebellion, antagonism, and all kinds of restiveness both in the media, churches, political divides and the general public. Allow me to shine. Shine your shine while I shine my shine.”