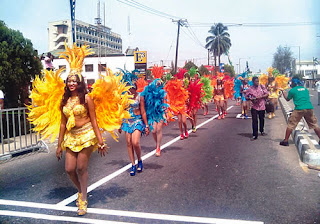 FUN lovers might have wished the 32-day Calabar festival lasted till eternity but as is said, brief is the show that lingers fondly in the memories of witnesses. It was actually a swell time for revelers, tourists and residents at the 2014 edition of the carnival which eventually lived up to its billing despite late preparation and boycott by some personalities who had at one point or the other contributed to make the show one of the most colourful celebrations on the globe.

At the kicking-off of the 10th edition of the carnival at the Millennium Park, Cross River State governor, Senator Liyel Imoke, described the carnival as the greatest show ever in Africa and assured revelers that the annual event had come to stay.Also speaking, Chairman of the State Carnival Commission, Mr. Gabe Onah, said the government had put in place good measures to ensure the sustenance of the yearly event.

He said apart from the commission and its structures, there was a band association in place as well as the right political will to ensure that the event continues to grow from strength to strength.However, there were other events which gave colour and content to the 32-day festival.

It was indeed a unique display of cultural dances from 18 local government areas of the State and invited states. States which participated in the 2014 edition of the cultural parade were: Nasarawa, Benue, Imo, Anambra, Katsina, Rivers, Oyo, Osun, among others.Carnival Calabar Queen Contest:A 24-year-old graduate of Theatre Arts from the University of Calabar emerged the new Carnival Calabar Queen (CCQ).

She is Miss Olawale Leaticia Bola who won the crown after an outstanding performance where she beat 25 other contestants to clinch the coveted crown.By this victory, the Osun State born Miss Olawale went home with the star prize of a brand new car, N2 million cash and lots of other packages.She again received the awards of Miss Congeniality and best evening gown appearance.

In the one year of her reign, Olawale will also serve as the Face of MACA, a role that involves advocacy among school children as a way of preventing the spate of teenage pregnancy and child abandonment.Following closely were Miss Obikwelu Uche Kourtney who emerged first runner up and got a cash prize of N500,000 and Miss Tochie Emenike, the second runner up who got  N200,000.

In her remarks during the event, the founder and Chair of MACA, Mrs. Obioma Liyel-Imoke, the wife of the governor,  stated that the pageant was borne out of the need to address the menace of child abandonment and neglect by using a young person as an advocate who would be going to post-primary to sensitise young people on the ills of premarital sex thus encouraging the practice of abstinence as the surest way to prevent teenage pregnancy and sexually transmitted infections (STIs).

Mrs. Imoke expressed appreciation to her husband, for his support in championing the cause of vulnerable women and children in the state through her NGO, MACA.She thanked all sponsors who have been part of the realisation of the vision of MACA and further called for support beyond 2015 when they would no longer be in office.Carnival Village:This is one of the distinctive features of the 32-day festival.

This year’s Christmas village was a beehive as traders came from far and near to display their wares. Goods were also sold at affordable prices in this village. It is also a relaxation spot with various side attractions like game arcade, musical concerts, among others.

Carnival Calabar (The biggest street party in Africa)Although the 2014 edition of the carnival cannot be compared with previous editions in terms of organisation, yet despite the late preparation, a lot of things happened which made the event unique.

This year’s edition, with the theme: ‘Celebration time’ which is the last for the Imoke’s led administration, attracted thousands of tourists including the Israeli Ambassador to Nigeria, Mr. Uriel Palti, his wife, among other top dignitaries.This is even as unprecedented crowd of tourists and residents besieged the carnival route to savour the joyous ambience of the street party.

Also, thousands of revelers crowded both sides of the 11-kilometre carnival route beginning from Mary Slessor Avenue down to the start point at the U.J. Esuene Sports Stadium. Food vendors seized the opportunity to make brisk business.Economic activities were indeed very high as other  business-minded persons also made the most of the opportunity by selling drinks, water and other items on the carnival route.

The crowd was so much that security men had their hands full trying to control the revelers from flooding the carnival route.The atmosphere was even more electrifying as the five carnival bands, neatly clad in beautiful costumes, stormed the carnival routes, dancing to the melodious tunes.

The surging crowd responded with great joy dancing along with the bands. Celebrations were so colourful that a first-time visitor would wonder what special pull is behind such celebration.  It was, indeed a combination of glamour and fanfare

.The Five Bands at the Carnival:From inception, Carnival Calabar has five competing bands. They are: Seagull band, Freedom Band, Passion 4, Master Blasta and Bayside Band. Each band has their  own distinctive features and style.Bayside Band:The leader of this band is former Governor Donald Duke. Duke boycotted this year’s edition, a development which may be connected with his displeasure over certain political events in the state. This is the first time, in 10 years Duke has boycotted the event.

The band is however easily identified by his characteristic and distinctive aqua marine color. The absence of their leader might have affected their performance this year as they came fifth.Masta Blasta Band:They emerged winners of the 2014 edition and were the overall winners of the 2012 and 2013 editions. They also won in the children category this year. This band commands a large crowd of supporters and members. It is the largest, most creative and most entertaining of the five carnival bands. They were indeed at their best this year with good costumes and beautiful choreography.

This year, the Masta blasta band received a big boost with top Nigerian entertainers and Nollywood actors like Pquare, Kate Henshaw, and Jim Ikye among others, adding depth and colour to their performance. Passion 4 Band:They are the first – runners up in this year’s edition. Passion 4 commands a strong youth base and beautiful costumes. They are touted as the competition’s favorites.  They are indeed one of the most successful bands having been six editions champions and three editions first runners up.

Passion 4 is wonderfully clad in green colour.Freedom Band: They are wonderfully adorned in yellow colour.  Since its establishment in 2005, the band has consistently been among the best three in all previous editions of the Carnival Calabar event. His Excellency, Barr. Efiok Cobham, the Deputy Governor of Cross River State, is presently the grand patron of the band. They occupied the fourth spot in this year’s edition.Seagull Band:Red is their colour. Seagull band performed below par in this year’s edition. Their leader, Senator Florence Ita- Giwa was conspicuously absent this year.

This, analysts say, may be due to her discontentment with certain political issues in the state. However, the Seagull band has a prize-winning mentality having occupied the number one spot on several occasions in the children category and placed first on two occasions in the adult category. They however came third in the 2014 edition.

It is however pertinent to note that the 32-day festival is not enough for tourists to savour the taste of the various tourism sites which spread across the length and breadth of the Cross River.Also the enormous economic benefits accruing to the state annually from small scale businesses which have made the most of the festival are another very significant feature of the Calabar Carnival,  and if successive governments, after Liyel Imoke make further efforts to sustain the yearly event, Cross River may just be the world’s preferred tourism destination.See you in December for another exciting 32 Days of NonStop Fun #ChristmasInCalabar #CalabarFestival