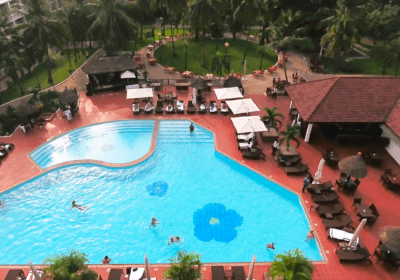 Foreign delegates arriving Ghana for the 4th Accra Weizo are in for a special Ghanaian Treat. Highlife is special music popular in West Africa and Ghana was the affirmed Headquarters of West African Highlife. In recent times the music gave birth to Trendy modern Hiplife that is how known all over the World.

One of the Sponsors of Accra Weizo Golden Tulip Hotel Accra Ghana will be hosting the guests to a special night by the poolside. The band will play a medley of popular Nigerian and Ghanaian songs. Golden Tulip Hotel Accra is a Top Quality international Brand Hotel situated near the Accra Airport. It is one of the oldest Hotel brands in West Africa and it has maintained its extremely high Standards.

Kaya Tours a leading Tour Company in Ghana plans a dinner for the international delegates. The Ghana Tourism Authority will be hosting the delegates to a 3 day Fam trip to Akosombo in the Volta Region of Ghana. Last year they were taken to the Cape Coast.

Delegates for Accra Weizo will be coming from 8 nations in East, West and South Africa.

Accra Weizo is one of the events geared towards getting West Africans to Cooperate amongst themselves. Accra Weizo is a Travel event now in its 4th edition aimed at creating a seamless travel environment in West Africa. It brings together Travel professional in West Africa region. The Region receives among the lowest Tourism figures per Capita in Africa. With a huge Population and over 40 Airports, Aviation is dominated by Companies from outside the Region

Accra Weizo the Private sector event for West Africa offers another opportunity for Ghana to notch up its figures.

Meanwhile, The Minister of Tourism Culture and Creative Arts for Ghana Honourable Catherine Afeku will host the Tourism day of Accra Weizo on the 23rd of June 2018.

As Accra Reinforces its position as the (Meetings Incentives Conventions and Exhibitions)MICE, capital of West Africa hosting Accra Weizo for the 4th time amongst other international events attracted to Ghana in the last one year speaks Volume of the Work done so far by the Ministry.

Accra is listed by ICCA the international Congress and Convention Association as the Top Conference Destination in West Africa.

Already many Major Tourism events have been hosted in Ghana in the last one year which includes the World Tourism Forum Africa and The UNWTO training for West Africa. Ghana has just secured the rights to host part of AFRIMA the African Music Awards.

West Africa is home to 15 countries of over 380 million people but Tourism and Travel is not the strong Suite of the Economic interaction in the region.

It is Already confirmed that the Honorable minister of Aviation for Ghana Hon. Cecilia Abena Dapaah will be Opening the 4th Accra Weizo event on the 22nd of June with a Paper titled ‘Harnessing the Opportunities in Aviation value chain in West Africa’

The first day will be the seminar on Aviation and the Second day will be dedicated to ‘Travel, Tourism and the Internet’ session to grow Travel Business and destination. It will be taking place at ada Ekesi Hall at La Palm Royal Beach Hotel

The topics to be discussed on the first session of the event which is dedicated solely to Aviation in West Africa include:

Confirmed panellists for that session are Capt Ado Sanusi –Managing Director of Nigeria’s oldest Airline Aero, owners of the major MRO in the region, Chike Ogeah the Vice Chairman SAHCOL, a leading Nigerian Owned Aviation handling and Logistics company, Alex Nwuba, CEO of Ghana based Smile Aviation and former CEO of Nigerian based Associated Airlines, Richard Kyereh from Africa World Airlines the leading Airline in Ghana. Other Airlines Chief Executives are expected to join the panel.

Because of the need to Organise the Tourism products available in the region to encourage Intra regional Tourism Atqnews will be hosting an Award for the Top100 Hotels in West Africa.

There will also be a Hospitality panel made up of Top Hotel Managers in West Africa to discuss “The Adapting of International Hotel Standards to the African Environment” Already confirmed Panellists which is a mixture of African and non African Hotel Managers include Marigold Vivian Mingle of Ridge Royal Resort at Cape Coast. She was a former General manager of La Palm Royal beach Hotel in Accra.

Pastor Emmanauel Geadda-Asando, Vice President-Ghana Progressive Hotels Association, Sajid Khan. General Manager, Tang Palace Hotel Ghana he is one of the most experienced Hotel. managers in West Africa having managed Fiesta Royal Accra, Golden Tulip Lagos, Golden Tulip Hotel Accra Ghana among others. Malah Saleh is the CEO of Djembe Hotels and Balafon Hotels in the Gambia. Currently he is one of the biggest Hotel proprietors in West Africa. Topics lined up for day 2 of the event on the 23rd include ‘How effective are travel bloggers, writers and influencers in promoting travel destinations in West Africa’ to be discussed by the following confirmed panellists will include Gabe Onah, Chairman Carnival Calabar Commission,

At the launch of Accra Weizo 4 years ago the Vision was to turn the 15 countries and its 380million people into a Domestic Tourism Destination.

It has taken four years for the Organisers of Weizo to reach out to over 150 Travel and Tour Operators in West Africa from 6 countries enough to start a regional association that will drive Tourism in the region.

WATTA will be an association for any player in the Tourism and Travel environment.
The interim Board of WATTA will be announced and Inauguarated at Accra Weizo on the 23rd of June 2018 at La Palm Royal Beach Hotel Accra.

The ECOWAS region despite a protocol of free movement has not grown Intra regional Tourism and Travel.

According to Mr. Ikechi Uko CEO of AKWAABA African Travel Market and Organiser of Accra Weizo, “Our Events are geared towards capacity building and networking. After the success of Banjul Bantaba, we expect Ghana to Surpass the Gambia Experience”