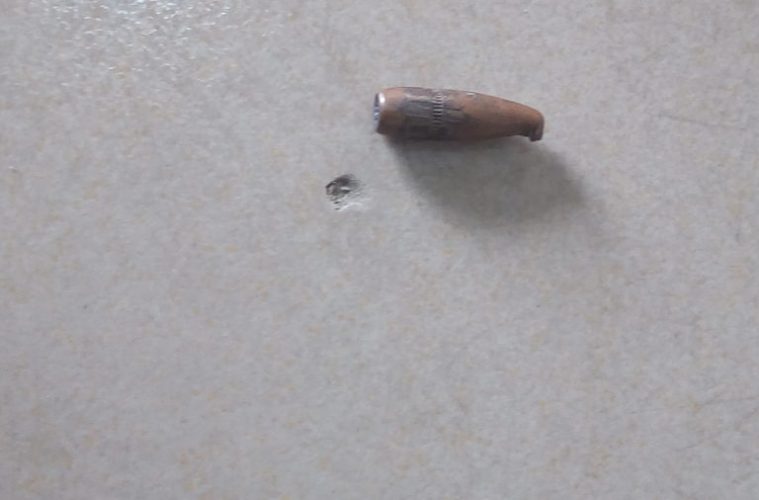 ACROJ TO WRITE POLICE OVER BULLET FIRED INTO SECRETARIAT

The Association of Cross River Online Journalists says it will write the Nigerian Police Force over a bullet found in its Secretariat in Calabar, the Cross River State capital.

A shot was fired into the office in May when Nigeria’s Acting President, Professor Yemi Osinbajo who had visited the state, was about departing with the bullet leaving a hole on a chair, the ceiling and the floor CrossRiverWatch gathered.

The office is located at No. 2 Ndidem Usang-Iso road by Rabana roundabout.

Mr. Richard Odu, the Publisher of Calabar24.com.ng was the only person in the office and he said that the sound of the gunshot coincided with when power was taken which made him feel it was a bulb that had exploded.

“When I heard the sound I initially thought it was one of the bulbs that went off, as the sound came immediately power went off.

“So I went outside and checked the bulbs but they were all fine. I went to the back of the compound to check too and I saw nothing,” said Mr. Richard.

He said that it was while returning inside that he noticed the hole in the chair after spotting its fragments on the floor.

As at press time, he was still at loss how the bullet found its way into the office and where it came through.

And, Acting Chairman of ACROJ, Mr. Hope Obeten and Publisher of CalabarBlog told this reporter that the incident is life threatening and the appropriate authorities will be notified in order to establish the immediate and remote causes and appropriate actions to be taken.

“It may have taken long but, we have to be careful the way we treat the issue and had to get feedback from all our members and the Board of Trustees before taking any action.

“We will write the Police in the coming days and attach all the evidence necessary to help them investigate the matter as anyone could have been hurt.

“The life of each member is important in this mission of ours to ensure we effectively report every nook and cranny of the state to the world,” Mr. Obeten said.