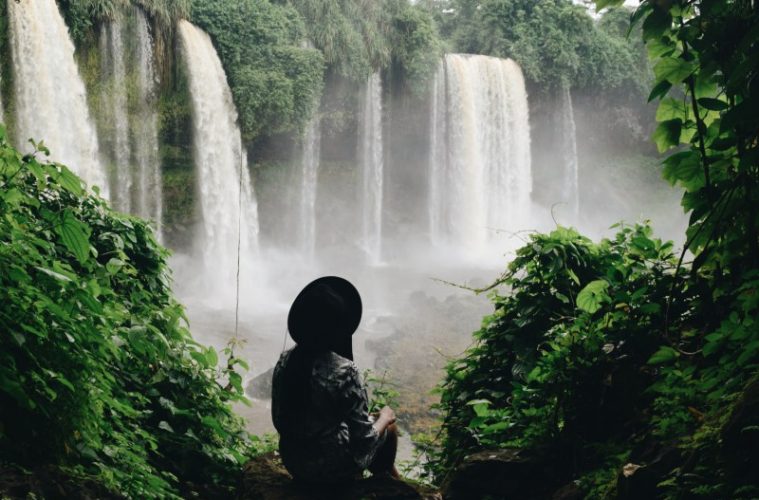 TRAVEL WITH A PEN: A TRIP TO AGBOKIM WATERFALLS

After spending the first few days of our holiday travelling from Lagos to Enugu and visiting the Obudu Mountain Resort, we hired a car to take us to Cross River’s capital city, Calabar, with a stop at the Agbokim waterfalls in Ikom. It took us about 2.5 hrs to get to Ikom and another 30 minutes to get to the waterfall

We took a tour of the fall with a designated guide who was extremely passionate about his job. He took us to the different view points of the fall and told us about the other ‘attractions’ around it. Our driver and guide got impatient at some point ‘cos this man was very detailed! Haha, I and my sister loved it though.

PS: We arrived early in the day, so we missed the rainbow at the bottom of the fall. That would have been so cool to see. We also couldn’t go down to the foot because of the season. But it was all good, we got to see all seven falls come out to dance.

Once the tour was completed, we hit the road again and continued onward to Calabar. The journey was fair and the road was good for the most part. I was awake all through so I didn’t miss this sight! I thought they were dead at first but then the car stopped and all they all raised up their heads!

Here’s something you don’t see everyday!

We got to Calabar in another 3 hours and I was extremely excited just to be there. The first thing that struck me about Calabar was dirt on the streets. And before you start imagining the worst, no, it wasn’t that bad. In fact, the city was cleaner than many parts of Lagos.

But the reason why this surprised me was because I had heard that if someone dropped litter on the street, someone else – especially motor cycle riders would pick it up and give that person a chase! So I was expecting to see a sparkling clean city. But I would soon get to know that many things in Calabar were falling apart.

My friend, Chakie (whom I first ‘met’ on Instagram), arranged for us to be picked up and taken to our hotel, where we spent our first 2 nights before being whisked away by my aunt who lives in the city too.

We spent the next few days with my aunt and her family and with Chakie, her sister and her friends. Between them, we got a tour of the city, visited Marian and Watt markets – to shop for all kinds of fish, University of Calabar, Marina – where we spent the night playing everything from video to board games (this was so much fun!), suya arcade – as the name implies, Cercopan – a monkey sanctuary which is dying due to lack of funds and Tinapa – which was basically a ghost town.

Throughout our stay, there was always talk about life during Donald Duke’s time as governor, which kinda made me feel like I should have visited then as the city was in its prime. But no matter, our visit to Calabar 2017 AD (after Duke) was splendid.

We enjoyed every minute of our stay. The sites were awesome, the food was delicious and the people were very warm and welcoming. We can hardly wait to visit again!

Reviewed by Amarachi – a systems engineer by day and super hero writer by night. She love to travel (obviously) and hope to inspire you to create your own adventures too!