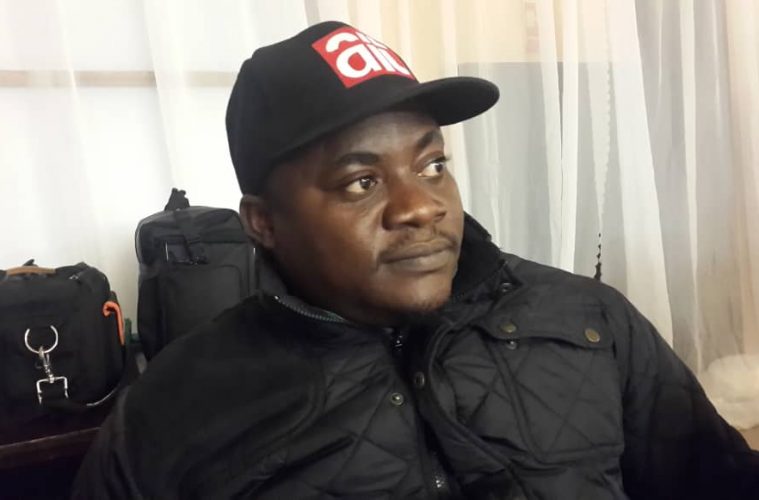 Cross River State Correspondent of Africa Independent Television,AIT, Rahseed Olanrewaju Zubair has been nominated as the most outstanding “rugged” Journalists Of the year Award  by the University of Calabar Student Union Government.

Olanrewaju, a known Journalist in Nigeria presently base in Cross River where he has been an advocate of good Governance, setting agenda for the government and a voice to the vioceless,using his media platform of AIT, Raypower and Faaji Fm to provide social services to the people.

In a  reference letter  UC/SUG/001/018/063,dated 12th October,2018 and address to the Managing Director  of Africa Independent Television,AIT Dr. Mrs Tosin Dokpesi by the executive president   of SUG ,Unical,Comrade Enyam Kelvin recalled the sacrifices and outstanding media coverage the Journalist and Daar Communications has given to the Students in particular and the University of Calabar Community in general over the years.

“The African contents of AIT programming has further make it a reliable content of the black race to the global viewers.

“In University of Calabar, AIT has been a good partner with periodic coverage of activities in the institution.

“What is of interest in particular was the consistency of AIT and Raypower in covering of students activities of Unical.

“These coverage sometimes comes with it’s challenges especially during protests which your media organization through your Correspondent, Rasheed Olanrewaju has paid a supreme price. 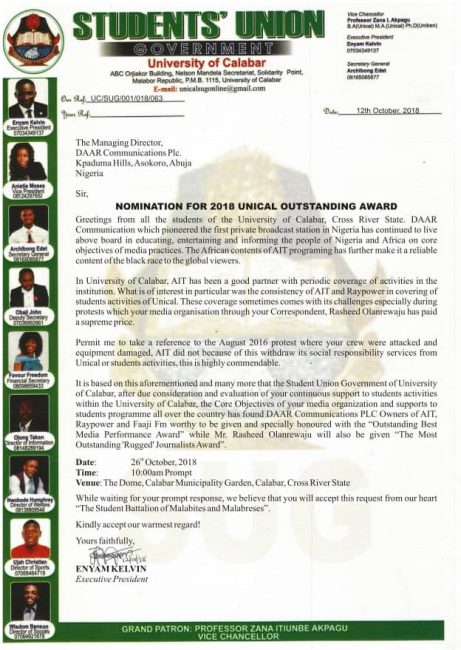 “Permit me to make a reference to the August 2016 protest where your crew were attacked and equipment damaged, AIT did not because if this withdraw it’s social responsibility services from Unical or Students activities,this is highly commendable.

“It is based on this aforementioned and many more that The Students Union Government of University of Calabar, after due consideration  and evaluation of your continuous support to students activities within the University of Calabar,the Core Objectives of your Media organisation and Supports to Students programme all over the country has found DAAR Communications plc Owners of AIT,Raypower and Faaji Fm worthy to be given and specially honoured with the “Outstanding Best Media Performance Award” .

Speaking on the recognition,The SUG president,Comrade Enyam kelvin  recalled the  October 16, 2015 Student Protest over the state of the Hostel in the University where Mr Rasheed Olanrewaju was the only Journalists on ground both as a reporter and Cameraman to cover the protest.this the  malabites and malabresses appreciate a great deal.

The Managing Director of AIT,Dr Tosin Dokpesi while congratulating her Staff, Rasheed Olanrewaju for his noted outstanding effort in news reportage  also commended the Unical Students and the entire University Community for their Continuous support and partnership with  Daar Communications plc.

Mr Rasheed was in 2017 given the best reporter of AIT for his prompt and creative news reportage and being a Multi-tasking  Journalist,an award presented to him at the Daar Communications headquarters,Abuja by the Managing Director, Daar News Services,Mr Imoni Amarere.