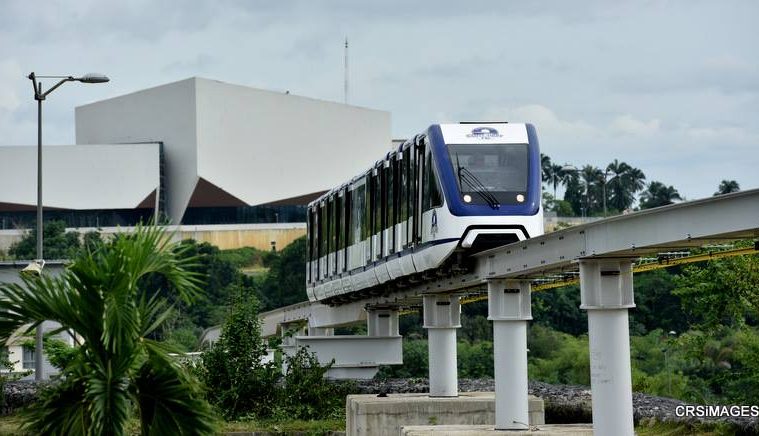 Cross River State has again recorded another first following the maiden ride of its ultra-modern monorail which took off yesterday from Tinapa Business and Leisure Resort to the Calabar International Convention Centre (CICC) at the Summit Hills and back to Tinapa.

This feat is one in a series of pioneering achievements which Cross River is known for.
It would be recalled that the state was the first to introduce a cable car in Nigeria, and the longest in Africa, just as it was the first to launch a canopy walkway in Nigeria.
On board the maiden ride was the Cross River State governor, Prof Ben Ayade, Managing Director, Assets Management Company of Nigeria, Mr. Ahmed Kuru (AMCON) and its top management staff among others. The premier monorail is designed as a transit for tourists between the Tinapa Business and Leisure Resort and the 5,000 seating capacity, multipurpose Calabar International Convention Centre.
Expressing excitement shortly after embarking on the leisure ride, the MD AMCON, Kuru said: “Cross River has done it again. First it was the longest cable car in Africa, then the longest canopy walkway and today we are riding on the first monorail in sub-Sahara Africa and it is something that is highly commendable.”

Kuru who was literally wowed by the elegance and luxury of the monorail testified: “The experience was quite awesome because it gives you the opportunity to see one of the most beautiful scenery in the world and I am very impress about what I saw.”

Speaking on the new business frontier with the state government on the management of the premier business resort, the MD said: “Like I always hold, Tinapa is more than a business, it is Nigeria’s heritage. It is important that we look at it beyond Cross River State because it is a heritage that we must work together as Federal Government and the state to project Nigeria which is what informed my visit to initiate this partnership.”

He explained that Tinapa is nature and technology at play that if fully harnessed and aggressively projected, can contribute immensely to the transformation of socio-economic landscape of the nation.

Responding, the state governor, Senator Ben Ayade said the coming of AMCON for the maiden ride was an indication that the company was willing and readily available to partner the state to revamp Tinapa.

His words: “As you rightly heard from the AMCON MD, Tinapa is not only a heritage, it is the pride of Nigeria and AMCON is here to give a helping hand to resuscitate this robust and tantalizing resort and bring it to its full potential in addition to what they are proposing to add.

“So, for me this new frontier with AMCON, which is talking about a partnership that has two vibrant technocrats with bright ideas and strong belief in Nigeria as a nation, is the one that will definitely translate into grater fortunes for Cross River and Nigeria at large.”

Lauding the new leadership of Asset Company, Governor Ayade said: “I am so glad that today in AMCON, we have a man who believes in true leader. It is only when we rise above ethnic sentiments and embrace governance while also allowing business to thrive by its natural forces that we will survive as a nation. AMCON has today demonstrated true leadership and has shown not just the love for Cross River State but love for Nigeria at large.”

On his desire to see to the completion of his predecessors’ uncompleted projects, considering the huge cost involved, Ayade reasoned: “I am very excited that I played a major role in seeing to the realization of this project. Don’t forget that this project was conceptualized by Donald Duke, prosecuted by Senator Liyel Imoke who came and gave it his best by pumping in a lot of money to see it come to life. I came in, in spite of the lean resources. I shut down everything to ensure that it has light.

“With this, we can clearly see that Cross River State shows consistency in leadership from Donald to Liyel and now Ayade, I see everyone carrying on other’s projects. I want to ensure that all the projects that were started by my predecessors are completed, even as I also pursue my signature projects side by side.

My primary focus in the first three years is to ensure the completion of all projects embarked upon by Senator Liyel Imoke before I embark on my own key projects.

Watch Video of the Monorail ride below: