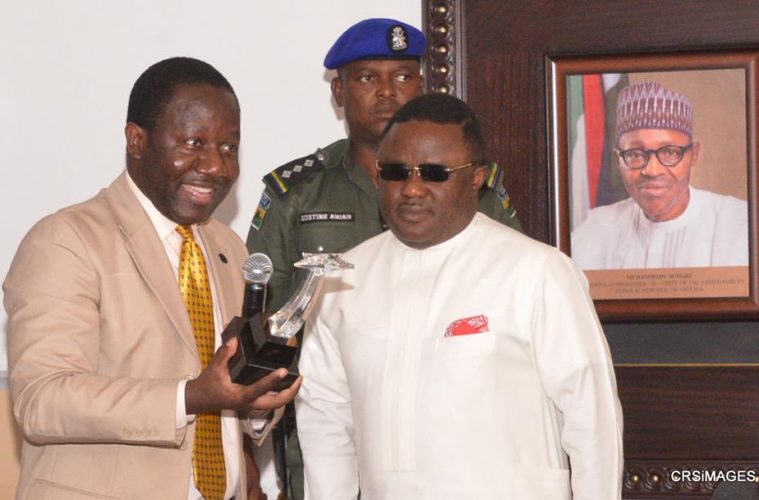 Cross River State Governor, Professor Ben Ayade has been conferred with the Award of Excellence by the United Nations Educational, Scientific and Cultural Organization (UNESCO) for his leadership and foresight in improving the life of the people of the state.

Presenting the award, the Executive Director Centre for Peace and President/CEO of US-UNESCO Clubs, Centres and Associations, Mr. Guy Djoken disclosed that “As a token and testimonial to your leadership and foresight in the manner you are improving the lives of the people of Cross River State and Nigeria, we have decided to encourage you with this to boost your morale for more result-oriented initiatives.

He lauded the state for being at the forefront of tourism development in the country saying: “Cross River has carved a niche for itself in Nigeria by pioneering tourism development in Nigeria. This will afford us the opportunity of showcasing your rich cultural heritage and other bounteous potentials in the state to the world to come and invest in these boundless opportunities existing here.”

Continuing, the Executive Director opined: “We want to help you have the Cross River State of United States because we see you as a very active state so as to enable you draw from the bank of opportunities we have in the United States through active collaboration and partnership with our chambers of commerce and industry to create wealth and continuously improve on the living condition of average member of this great state.”

On areas of collaboration with the state, Guy Djoken further disclosed that UNESCO will love to partner the state to establish a virtual Information and Communication Technology (ICT) Centre that will serve as a call centre as well as support all other IT-related activities with the view to building the entrepreneurship, capacity as well as create jobs among the youths to make them self-reliant.

“Apart from our cardinal objectives of promoting peace around the world, free education for a civic society, we are encouraging entrepreneurship training among the young ones to make them self-reliant, create jobs and be employers of labour which is a big departure from what is currently the trend in Nigeria where everyone looks for white collar jobs that do not exist,” he added.

Djoken who highlighted other areas of partnership with the state said: “I’m glad to announce to you that we are ready to work with you in the area of agriculture, renewable energy, education and health care delivery that we have initiated in the state, as well as our resolve to help you attend sustainable development goals.”

He said following the UN declaration of 2015 – 2024 as Decade for people from African descent leading to celebration of blacks around the world, the agency will assist Cross River to host one of the events to celebrate the anniversary.

Meanwhile, the Department for International Development (DFID), has described Cross River as a front runner state in Nigeria.

Making this declaration in Calabar when he led a delegation of the department on a courtesy call on Governor Ayade to explore areas of partnership, the team leader of DFID, Dr. Jerry Lacey, said Cross River was one of the front runner states in the new Nigeria given her commitment to the core values of good governance and human integrity.

He commended the governor for what he described as “his pacesetting initiatives in transforming the state”, assuring that “DFID would support the state’s effort, if Cross River must be active player in the palm oil business as a huge source of revenue and help it restructure in line with what
Indonesia has done as regard palm oil export. DFID is ready to accord the state the same assistance it gave Indonesia.”

He further revealed that Cross River State represents 33 percent of the department’s activities in the region. According to him, “what we envisaged is that over 9000 people whom we are working with now are already in Cross River, and about 10 to 20 thousand would be Cross River-based between now and 2018.

“At present, the main program actually has had about 25 thousand beneficiaries in the Niger Delta area and Cross River State, the largest single contribution, as it accounts for 33 percent of the development we have to make in Niger Delta.”

In his response, Governor Ayade thanked the delegations from the two international agencies (UNESCO and DFID) for what they have been doing in the state to empower the indigenes and assured them of total support from the government and people of the state.

He stressed that Cross Riverians were people of integrity and honour and that the best place to do business in Nigeria was Cross River.

He charged them to take advantage of the state potentials in the areas of banana and rice production, while soliciting their support for the signature projects, maintaining that the focus of his administration was on infrastructure, agriculture and capacity development.

He said he was overwhelmed by the UNESCO award because according to him, all that is on ground is nothing yet compare to his overall agenda for the state.

He maintained that he was he was only being spurred to do more and in a manner that will touch lives of the most vulnerable in the state.

On Medical Tourism as announced by UNESCO which is set to bring an Indian firm to establish a world-class specialized hospital in Calabar, Ayade dsiclosed: “We have a specialize hospital we are currently constructing to complement our tourism drive which we are developing under our medical tourism brand. Civil works is ready and we are at the point of equipping the facility, so you can take over from there to kick start your services as soon as possible.”

The governor assured that “with the conducive business climate we have created in the state, coupled with the hospitable deposition of our people, Calabar will definitely bring a huge return on your investment if you site your health facilities here, as all the lofty programme initiatives of your organization will be fully supported by his administration.”