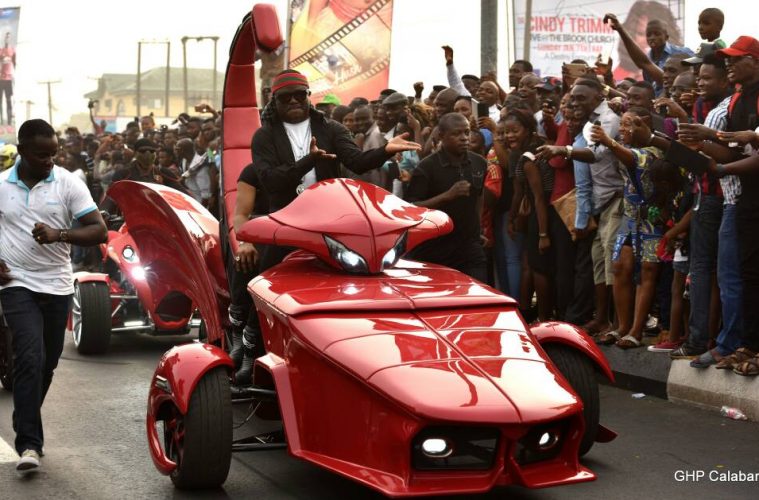 Leading the charge, which took off to an acrobatic start, the revelers screamed and cheered as Ayade riding with his wife and his team of riders took to the road from the Millennium Park.

Riding on a black spider bike, the former governor, Donald Duke and his wife were also cheered by audience.

Eyewitnesses said the bikers carnival, which before yesterday went through a series of rigorous dry runs, lived up to its billing as they pulled lots of stunts in front of the ever cheering crowd.

The throng of spectators was also thrilled by the exotic sport cars with open roofs that added colour to the event along the 12-kilometer carnival route. Gov. Ayade and his wife riding on the 12km Carnival route

Chants of “Nothing do you”, “Ayade carry go” “No vacancy at Diamond Hill”, “Kinetically crystallized for 2019”, rented the air as the governor rode past in his scorpion-like exotic bike, while thumbing up to the mammoth crowd.

Justifying the introduction of the bikers’ carnival, which is in its second edition, Ayade said: “The motor parade, which you saw earlier is to connect all those who have deep pockets to come and spend their money in Calabar. That is the economic model I am bringing to the state.” Reflecting on the various changes the carnival has undergone since its inception, Ayade said: “It has undergone dramatic changes in the last 10 years; from the elderly to the middleaged and now to the young people. It was pertinent to change the content of the carnival to reflect the enthusiasm and the adrenaline pumping nature of the young people.

“Before now, it was procession and dance on the streets and of course now I am trying to tell the story of migration, trying to bring out the business aspect and trying to connect the youth and inspire them.” On the brand of bike he rode with his wife, Ayade explained: “I was trying to show the red smart energy in me, red scorpion. If you look at the head, it is a crocodile. If you look at the fins, it tells you that look, I am an Octopus. I have the capacity to change at all times. If I want to be a young person, I will; as a Professor, I will; as a Senator, I will; if I want to behave like a Lawyer, I will; but more importantly I don’t forget my history and where I come from.”