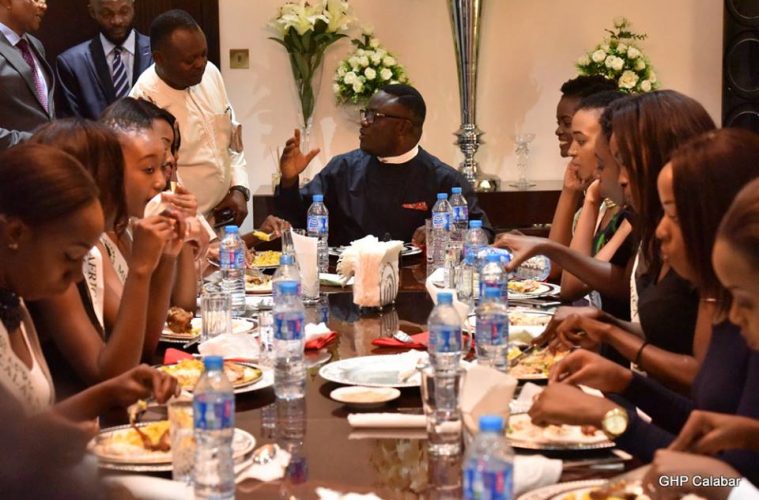 The initiator of the Miss Africa pageant and Governor of Cross River State, Prof. Ben Ayade on Monday hosted the 2016 Miss Africa beauty queens to lunch at his private residence at the State Housing Estate, Calabar.

Shortly before the lunch, the Governor formally presented the star prize of Ford SUV Jeep and USD 25,000 cash to the maiden edition winner of Miss Africa, Calabar 2016, Miss Neurite Mendes from Angola.

Senator Ayade also presented the sum of USD15,000 and USD10,000 respectively to the First Runner Up and the Second Runner Up, Miss South Africa, Refilwe Mthimunye and Miss Cameroon, Foje Anwi Jencey respectively. Other contestants who participated in the Miss Africa, Calabar 2016 were each handed an envelope of USD300 for participating and for the show of good sportsmanship before, during and after the winners emerged.

Speaking at the presentation ceremony, Governor Ayade said that as organizers, they have developed a strong philosophy not to interfere with the process of selection of the winners and that with the text messages he received from across the globe it was indicative that the winner, Miss Angola was a popular choice and the team of judges did a wonderful work of coming out with a true Miss Africa. Ayade who praised the winners and the rest of the participants disclosed, “We are planning to have a Miss Africa House in Calabar where the Miss Africa will be living in and with a provision for all the contestants. We are going to start the climate change with a green carnival, planting of trees in Calabar. Miss Africa will from time to time put on her jeans to plant trees, the prettiest lady in Africa with the best brains planting trees. All of you will be participants for the carnival and the state shall be responsible for your tickets and stay”.

The Governor went further to say that apart from promoting the issues concerning climate change, the reigning Miss Africa and her team will also be promoting the Cross River Garment factory.