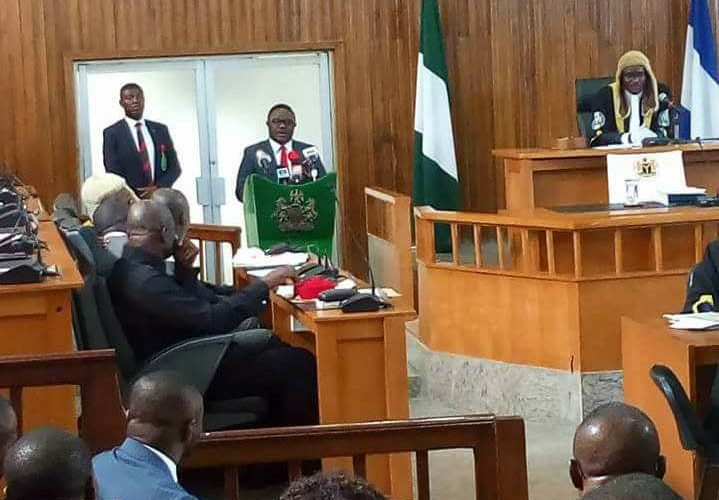 Gov.Ben Ayade of Cross River has presented a budget of N1.3 trillion for the 2018 fiscal year to the Cross River House of Assembly for deliberation and passage.

Ayade, who presented the budget on Thursday in Calabar, said that the proposal was designed to add value to the socio-economic development and well being of the people of the state.

Ayade, who tagged the budget as “Budget of Kinetic Crystallisation’’, said it was meant to crystallise what the state had achieved in the past two years of his administration.

He said that the priority of the budget was to develop the state’s deep sea port and the super highway which he said were his two marked projects.

The governor said that 70 per cent of the budget was for capital expenditure and 30 per cent,re-current expenditure.

According to him, the size of the budget is expected to create room for potential investors, now that the annual construction of the state deep sea port and superhighway has commenced.

He added that the budget was for actualisation and implementation of the state deep sea port, super highway and other laudable projects earmarked for completion. “The 2018 budget of N13.trillion, tagged `Kinetic Crystallisations’, is meant to drive the economy of the state to an enviable height.

“The sum of N126billion was budgeted for the Ministry of Infrastructure. This is to help us develop critical assets in the state.

“N7 billion was also budgeted for the state job centre with a view to helping us train our unemployed youths with marketable job skills.

“Also, we have budgeted N2billion for our school feeding programme. In addition to that, we also budgeted N52billion for social welfare to care for the aged.

“My administration is human friendly and my desire is to ensure that every family has what to eat before going to bed,’’ he said.

The governor further said that the garment factory, with 1,000 workers, would be increased to 3,000 in 2018 as part of his administration’s drive to engage the unemployed in the state.

Responding, the Speaker of the Assembly, Mr John Gaul-Lebo, commended the governor for commencing work on the deep sea port and the super highway.

Gaul-Lebo said that the two projects, when completed, would attract more investors to the state and improve its revenue profile.

He assured the governor of the assembly’s continued support for the economic and political growth of the state.