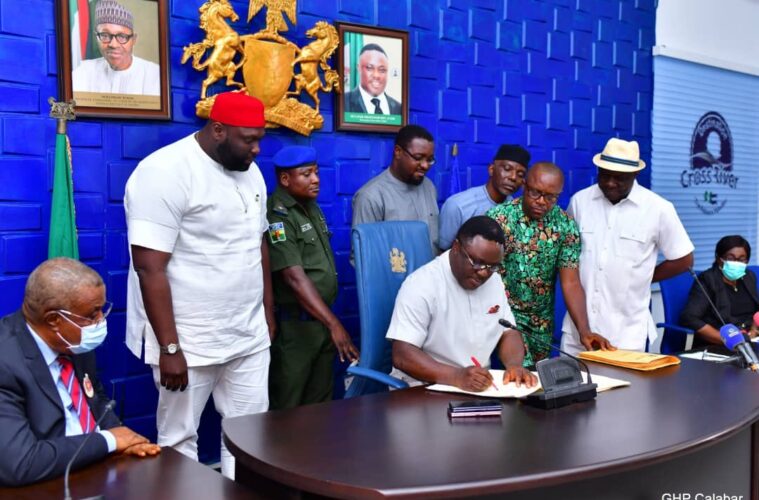 Speaking at the signing ceremony held at the State Executive Council Chamber of the Governor’s Office, Calabar, Governor Ayade said the N354.55bn budget will ensure the take-off of most of industries built by his administration with their products becoming available in the market.

According to him, “Most of the industries we started have all been completed. This budget is, therefore, aimed at getting the products from these industries into the market in quick and agglutinated succession.”

Justifying his administration’s budgeting style, Ayade said: “Our administration was fully aware that a budget in a developing economy could not be an envelop budget because you budget to your dream, vision and aspiration.

The governor commended the speaker and members of the state House of Assembly for their diligence in passing the bill into law.

“The figure is a major departure from the earlier figure presented to the House of Assembly for consideration. And the Speaker of the House has gone ahead to give strong reasons for the House’s adjustments to the original budget as then presented. That indeed, shows clearly that the legislature is alive to its responsibility as a clearing house.

“I want to sincerely thank the House for discovering some of the gaps in the budget. I must add that what the executive submitted, were estimates in the sense that the real power of appropriation lies with the House of Assembly. The oversight function of the House derives its power from the Appropriation law. And that law is the sole responsibility of the House,”, the governor stressed.

“However, we had to subject that power as established by law to public opinion via the instrumentality of referendum that was earlier conducted. But in the course of the exercise of that referendum, it became very clear that the generality of Cross Riverians were quite excited and interested too, in the privatization of the industries to guarantee the workability of the factories.”

Ayade who used the occasion of the signing of the Appropriation Bill to assure that he remains irrevocably committed to returning power to the Southern Senatorial District of the state by 2023, for justice, equity and fairness, said the government had to make a U-turn on privatising the industries because “there was a minority percent that felt strongly and backed up too, by evidential commitment why privatization might not end well. I reflected strongly on the position of the minority and came to the conclusion that having used government funds to establish factories, I would not want to be accused of selling those factories to private individuals and cooperations.”

Ayade also disclosed that “this budget has therefore made provisions for a take off grants for the factories under a management structure. So the factories will be run as assets and property of the Cross River State Government.”