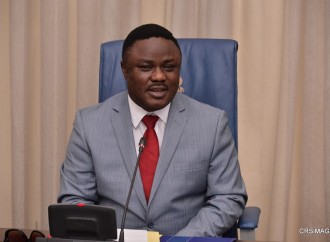 AYADE: VANGUARD GOVERNOR OF THE YEAR 2016, PUTTING VISION TO WORK

It is a zeal that beats the imagination of many; but for an academic who successfully conceived the remediation of groundwater from sewage using solar power, Governor Ben Ayade’s efforts in Cross River State are hardly surprising.

Using the power of intellect, Governor Ayade has, in 18 months, put Cross River on a path of sustainable growth. A sampler:   In an economy where nearly all states are finding it difficult to pay salaries, Cross River State was able to pay the December salary of its workers on the first day of the month! By February, the state capital could become the first Nigerian city to enjoy uninterrupted power supply through a 20 MW power project that is to produce power embedded for the state.

Governor Ayade came to power with a burning desire to lift the infrastructural and human capacities of the state which, until his advent, was described as a civil servant state. That depiction was worsened in the last decade after it was stripped of its status as an oil-producing state, leaving the state’s managers with the challenge of generating income without oil receipts. It was a task that Prof. Ayade took up with great aplomb.

Unlike some who would suffocate men and machinery with taxes as a way of generating income, Ayade has trudged the opposite direction, remarkably pushing through the State House of Assembly, a law which grants tax exemption to Minimum Wage earners and artisans.

“Governor Ayade does not believe that a country can tax its way to prosperity,” an aide told Vanguard in his clarification of the Tax Exemption Law.

The provision of uninterrupted power supply expected in February is the precursor to more adventurous schemes including the transformation of Calabar into a Smart City with the integration of multiple information systems in the management of government assets.

When fully operational, a Wi-Fi system would be available for dwellers and visitors to tap into. The Smart City project may have been formed out of the pioneering efforts of previous administrations, but the governor’s drive is bringing it to fruition.

Revolutionary as the above schemes may be, they are, however, only peripheral to Ayade’s big ideas on the development of infrastructure.

The 260 km dual-carriage Calabar-Katsina-Ala superhighway, the biggest road project to be conceived and commenced in that section of the country is one of the signature projects of the Ayade Administration. The purposefulness of the superhighway was not lost on President Muhammadu Buhari who did not mind political differences to give his endorsement to the project. The $3.5 billion highway will be by far Nigeria’s most sophisticated road with speed cameras and Wi-Fi internet connectivity.

The road is designed to be an evacuation corridor or passage to another signature project of the Ayade Administration: the Calabar Deep Sea Port. What the state lacks in terms of oil resources, it is expecting to recoup through service delivery to be provided by the Deep Sea Port and complemented by the super-highway.

With the two projects still in their initial stages, critics who saw the governor as only an idealist were by last September forced to also see him as an actualiser when another signature project of the governor came on stream: The Calabar Garment Factory reputed as the largest garment factory in the world by floor size, came on stream last October with 300 persons initially directly employed. It is hoped that the factory would employ up to 2,000 persons working in different shifts.

The factory with more than 2,000 sewing machines is expected to soon receive recognition from the Guinness Book of World Records as the largest garment factory by floor size. The police authorities have pledged to partner with the factory for the production of police uniforms.

In the area of rice production, Governor Ayade has, in collaboration with investors from Thailand, commenced moves to mill the rice produced in the state – which used to be milled and bagged in neighbouring states.   More, the state is presently constructing a Rice-City project in collaboration with the Thai investors. The project is expected to produce a specie of highly vitaminised rice to be sold locally and exported; the project will also produce highly specialised rice seedlings for export.

The Ayade administration has used special purpose vehicles, sometimes in partnership with foreign investors, to achieve most of its goals. Construction work is presently ongoing at a site along the Goodluck Jonathan Bye-Pass in Calabar, for the Calabar Pharmaceutical and Cosmetic Company, CALAPHARM, a project that is expected to generate about 2,000 jobs.

Governor Ayade is a man full of dreams. His vision is to raise the status of the citizenry, a dream he pursues with much bravado. His ideas defy the run of the mill art of governance. His financial engineering also defies the recessionary forces, just as his seemingly out of date Keynesian proclivities of injecting the state to lift the economy. But so far, everything has worked for Prof. Ayade, a man that has taken delight in pampering workers in an economy where workers in many other states are on collision course with their governors.

For his innovations in statecraft, enterprising vision in development and his pursuit of the dignity of labour, Prof. Ben Ayade was voted as one of Vanguard’s Governor of The Year, 2016.