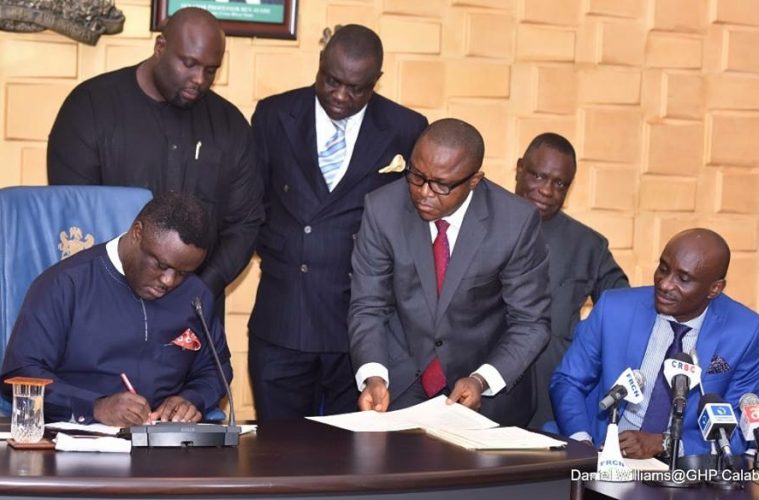 AYADE WEEPS AS HE SIGNS HISTORIC N1.3TRN BUDGET INTO LAW

The Governor who had asked that the budget be committed to God, broke down in tears as the prayer was being said by Rev. Fr Bob Etta, the Special Adviser on Religious Matters.

Signing the budget tagged, Budget of kinetic Crystallisation, Ayade maintained that “the state must create a new vista, prospect, horizon and income pattern that will define us by what we are and not what the world sees us to be,” pointing out that, “we must put an end to the civil service status of Cross River and we can only achieve this when we think out of the box.”

The Governor who went emotional and could not hold back his tears, reasoned that in budgeting such humongous amount, his administration was driven by a conscious determination anchored on a very clear ambition, with timelines and clear performance indicators that measure for the people what they expect to achieve in order to change their story.

Going philosophical at some point, Ayade also said, “in the 21st century you don’t look before you leap, you leap before you look. Great men all over the world are being driven by visions and any man who sees with his eyes, his vision would be impaired by mountains, bridges, houses and trees,” adding that, “a great visioner who sees with his mind and soul is not impaired by any obstruction neither can money be an impediment.

“It is very clear that there will be conflicts between expectations and what we will get, but we will be driven by the we-can-do spirit while decoupling ourselves from the continuous dependence on federal allocation.”

Ayade argued that the state was in “need of a stabilising factor, a budget of this nature to be able to cushion the impact of the internal crisis that do arise, particularly at a time we are setting an agenda for a new prosperity that will change our story.”

Other projects the governor listed to his credit within the short period were the completion of the garment factory and pharmaceutical company with the later awaiting commissioning, completed Rice City with the commencement of installation works, completion of earthworks on the 148km dual carriageway in the northern senatorial district, the agro industrial park, the rice mill in Ogoja and the cocoa processing plant in Ikom, with the equipment for the plant paid for and awaiting delivery.

Ayade therefore, enjoined Cross Riverians to “be united by these common aspirations that these projects which will indeed kinetically crystallise all our ambitions when we all put our hands on the table,” adding that, “as part of the philosophy of this budget, we focus on human capital development to put food on the table which was part of the agenda we did in year one and two, to say here we come with a new agenda, food on the table, hands on the plough.”