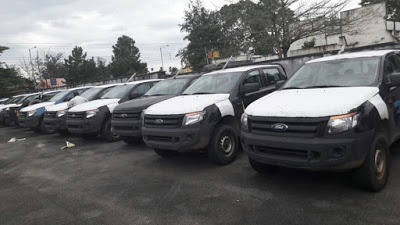 The 28 commissioners in the Governor Ben Ayade led administration in Cross River State have received new utility vehicles 10 months after they were sworn in.

It is unclear if the vehicles, 2015 model Ford Ranger utility vans are part of the car loan scheme introduced in May by the Governor or if it is to serve official purposes only.

The vehicles, displayed at the parking premises of Government House in Calabar saw the 28 members of the state executive council trickle in one by one and pick up the one with their ministry’s name crested on it and leave.

Findings revealed that only a few commissioners met working vehicles upon assumption of office with some collecting those which were used by heads of departments or Special Advisers.