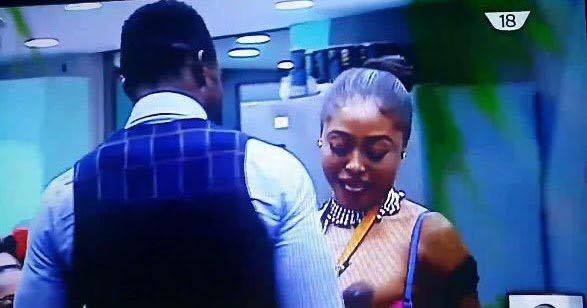 Bassey who entered the house a fortnight ago was nominated for eviction and on Saturday night did not let an opportunity to suckle Coco Ice boobs pass him by as an adult conversation between both was quickly followed by Coco Ice advancing towards him and pulling down her dress and laying bare her left boob which Bassey did not hesitate to dig his mouth into with other housemates watching in shock.

Both were up for eviction alongside Bassey’s seeming favorite housemate, Debbie-Rise.

Sunday evening saw more drama from Bassey who kit himself in his traditional Efik attire hoping not to get evicted. His wish was granted but Coco-Ice was eliminated.

Bassey collapsed on the floor when he heard Debbie-Rise name being mentioned by host Ebuka, thinking she had been evicted; creating scenes in the house.

Bassey collapsed upon hearing that Debbie-rise has been evicted (Photo Credit; Facebook/BBNaija)

Bassey is the younger brother to Special Assistant on Carnival Planning to Governor Ben Ayade of Cross River, Effiong Ekpenyong, popularly referred to as Double ‘E’.