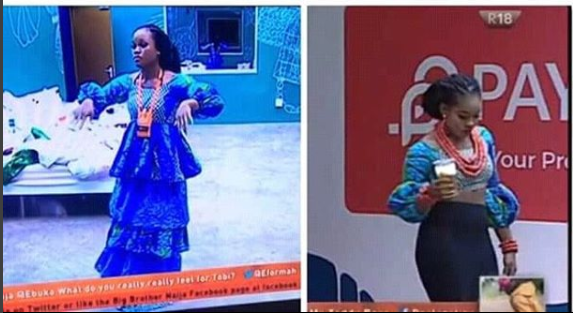 BBNAIJA: CEE-C AT RISK OF PENALTY OVER ‘DISRESPECT TO EFIK CULTURE’

Arguably the most talked-about housemate in the third season of Big Brother Naija, Cee-C may have finally bitten more than she can chew.

The controversial contestant drew the ire of fans and the show’s sponsor on Saturday after making comments adjudged to be “offensive” about the outfit provided for the weekly party.

Dissatisfied with the efik traditional outfit given to her, she cut it into two and wore only the top.

Cee-C described the multi-layered dress as “a waste of time and cloth by the tailor” and asked a fellow housemate, “na person siddon do this thing?”

The official sponsor of the show, Payporter, described Cee-C’s action as a “disrespect to our brand”.

“PayPorte is very displeased by the comments made by @ceec_official about the outfit given to her,” the company wrote on its Instagram page after Saturday’s show.

The sponsors who noted that the theme was #RepYourCulture, posited that Cee-C’s ‘crop top’ was not cultural.

They also posted their displeasure following a fan outrage.

Similarly, the Special Assistant to Governor Ben Ayade on Carnival Planning, Mr. Effiong Ekpenyong a.k.a Double ‘E’ has called on the organizers of reality show to discipline Cee-C for disrespecting the Efik tradition.

Mr. Ekpenyong who took to Facebook to express his displeasure said that her action was irresponsible and demanded that she should be punished to serve as a deterrent for others.

“As a proud son of Cross River State who reveres the Efiks, recognises and respects Culture and tradition, I strongly believe Cece’s (sic) ill conceived action is a cause for serious concern and as such requires prompt action from the organizers of the BigBrother Niaja Show as she has not only insulted her benefactor, she has by this action insulted an entire culture – the Efik Kingdom.

“I insist that Cece (sic) should be forced to see the folly of her ways and disciplinary action be instituted against her. She should be made an example of, to serve as a deterrent to others. If she can flagrantly run down a Proud Sponsor Of The Programme that has made her, then she will stop at nothing to destroy the Show.

“I call on well meaning Nigerians, particularly the Efiks, Calabar and Akwa Ibom to be very vocal in their condemnation of this sacrilegious act by Cece and demand that immediate remedial action be taken. Thank you.”

Cee-C, who has been in the BBNaija house for 66 days is up for possible eviction from the house on Sunday.