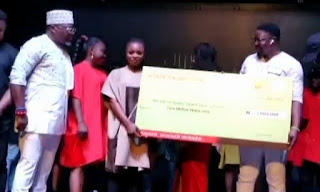 With the tough competition for the crown of Qtaby Talent Hunt 2021, singer and professional dancer Janet Anwang have defeated 15 finalists to clinch the top prize of N1 million.

Anwang originally auditioned in the dance category; nonetheless, she pulled a surprise performance by opening with her rendition of Adele’s ‘Set Fire to the Rain’. “I entered the dance category, but I remember the judge telling us to stretch our limits… so I am giving it my all,” Janet said right before performing the power ballad.

The second part of her performance saw her delivering an elaborate dance routine that incorporated different styles. She also provided a voice-over that guided the audience. Performed within the allotted four minutes, the judges — Efe Omorogbe, Esegine Allen (Orezi), Omotunde Adebowale Lolo1, Femi Branch, and Schulz — were visibly impressed, showing their approval by clapping, standing, or cheering her on – a rare reaction enjoyed by a few acts that evening.

The show’s runner-up, Sam Teddy (real name Ayodeji Samuel) gave his twist on 2baba’s ‘Outside’, infusing vocal ornamentations that turned the performance into a serenade fest for the ladies in the audience. He walks away with an all-expense paid video shoot and promotion courtesy of Trace TV.

The sophomore outing of Qtaby Talent Hunt which took place at Terra Kulture also embraced talents in acting, video directing and broadcast. The show received entries from over 800 hopefuls via online auditions.

The convener and CEO of the outfit, Victoria Nkong, elaborated on the show’s mission.

“Qtaby is about adding value to young talent who need a means of expressing their creativity. There is so much talent in Africa, but a lot of people do not know how to properly harness it. Qtaby was an idea that came about to help give these young African talents a means of expression and a platform to kickstart their careers,” she said.