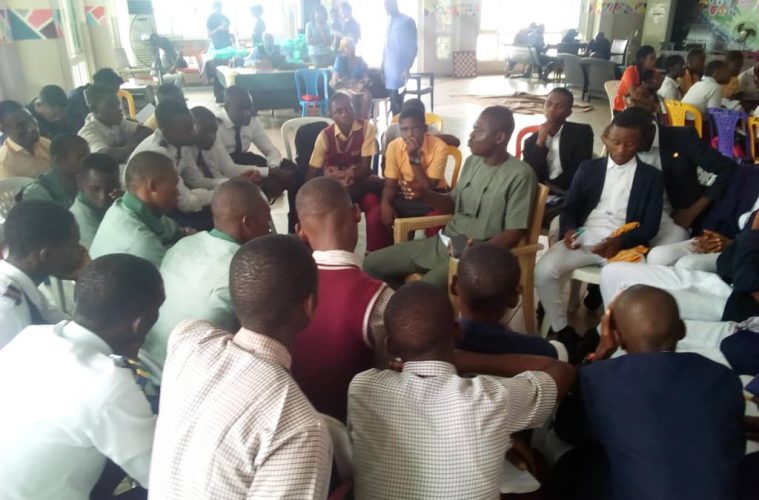 The Marketing Manager of Aids Healthcare Foundation Nigeria (AHF), Mr. Steve Abarisade has charged students to be mindful of the kind of information and education they acquire because it determines the future.

Mr. Abarisade said this in Calabar while giving his welcome remark at a one day gender based sensitization program, organized by his NGO in collaboration with BrenCare Foundation tagged “Boys to Men” where he averred that the program is set empower young boys to be able to speak out when faced with challenge.

“We see today that we have a lot of seminars, programs organized for the girl child but we can’t say same for the boys, as we believe that they are boys and can take care of themselves wherever the find themselves.

“Boys have be neglected, we have over looked boys, who turn out to become over looked men. We are aimed at reaching out to those who have not been reached, we are in over 43 Countries in the world and over thirteen countries in Africa, Nigeria inclusive”. He said.

Speaking also in an interactive session with the students, Pamela Braide called on NGOs and relevant institutions, to create a platform for awareness on issues concerning gender based.

“It is one thing to talk about how boys and men behave better than the other, the question remains do they know, have they being told, do they have these examples, and where they don’t a program like this goes a long way to guide young men.

“I think the society is made up of people, and I think that people, individuals need to do better in terms of gender role”. She said.

Speaking with newsmen, the Executive Director BrenCare Foundation Miss. Brenda Effiom, affirmed that the program is set basically to give boys the opportunity to speak out when faced with issue concerning them.

“Men suffer sexual violent both emotionally and physically, but are not able to speak out because of the way the society has actually place them. So men go through pains without speaking out.

“So this program is organized basically to give boys the opportunity to talk about what is actually affecting them and to collectively seek for open ways to address their problem.

“We won’t stop here, we will follow them up, by setting up club in their Schools, we will be having the discussion forward until we are able to break boys in our society”. She maintained.

Some of the participants who spoke to this reporter, Master Michael Essien of Hope Waddle Training Institution and Miss. Mfon-Obong Akpan of Federal Airport Authority of Nigeria Secondary school expressed happiness to have attended the program, saying they have learnt something new.

Highpoint of the event was an interactive session, group discussion between the participants and the organizers.

Some pictures from the event below;