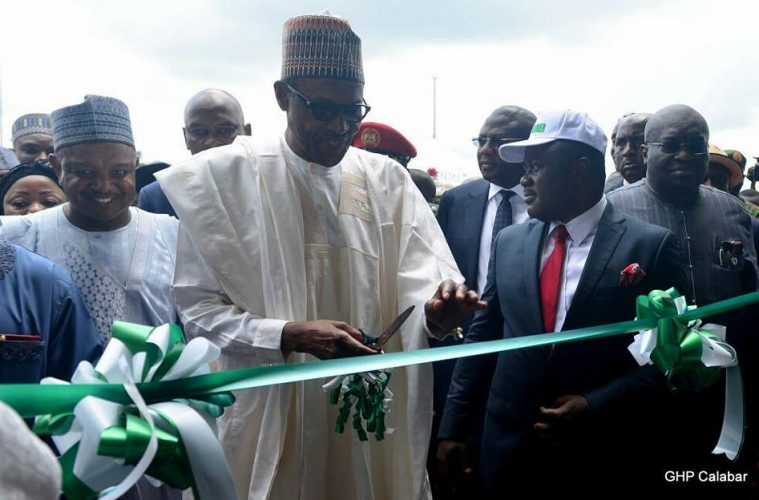 The President said the project was in line with his administration’s zero oil economic roadmap with Cross River Governor, Senator Ben Ayade becoming a reference point in that vision.

“When we assumed the rein of leadership of our dear country, our administration launched a zero-oil economic roadmap as a way of making our country less dependent on oil, while encouraging investments in other sectors of the economy, particularly agriculture.

“I am happy that Governor Ayade keyed into that policy and has today become the reference point in our agricultural revolution effort.” While emphasizing the significance of the event, President Buhari said: “That we are gathered here today is no doubt a determination woven through to precision and a glowing testament to the fact that the policy is working.”

The President who lauded Ayade for the giant stride and for keying into the federal government’s diversification agenda, further noted that the factory spoke loudly about his administration’s strides in agriculture, adding that it’s capacity to produce high yield and disease resistant seeds, will aid in job creation and earn revenue for the state.

“The factory, said to be the first in Africa, is an automated plant with a capacity to produce high yielding vitaminized and disease resistant rice seedlings,” Buhari said. On the impact of the seedlings factory on the economy, the President said: “Seedlings from this factory will improve rice yield from the current national average of 3 to 4 tons per hectare to about 9 to 10 tons per hectare, thus helping to ensure rice sufficiency in the country and doing away with import and saving foreign exchange for Nigeria.

“Besides creating employment opportunities, I have no doubt that this rice factory will also be a veritable platform for income generation for Cross River.”

Continuing, the President said: “I am further told that the factory has the capacity to meet both foreign and domestic demands. This will go a long way in placing Nigeria on the global rice production map.” He further directed relevant federal parastatals to partner with the state even as he hoped that the factory, alongside other agro-based industries being built by the state will inspire other leaders to key into his vision of ensuring food security for the country.

“I therefore, enjoin relevant Federal Government Agencies such as the Ministry of Agriculture and the Central Bank of Nigeria (CBN), through its anchor borrower’s programme, to partner with Cross River in the area of supply of seedlings to our farmers.

“With Governor Ayade’s other investments in agriculture such as the ongoing construction of an ultramodern rice mill in Ogoja, the cotton farm in Yala, the cocoa processing plant in Ikom and the Banana plantation in Odukpani, the feed mill and yellow maize farm in Obubra as well as the ultramodern poultry farm for export of frozen chicken amongst others, it is clear that Cross River has found a pathway to decouple itself from over reliance on federal allocation. “It is evident also that by conceiving projects such as this, Governor Ayade has a keen eye for tomorrow; focusing on projects that are building a new economic base for the state rather than projects with short term benefits for the purpose of making cheap political gains.

“It is therefore, my hope and expectation that other states that are yet to fully take advantage of the zero-oil economic roadmap of the federal government will take a cue from Cross River State.

“Once again, I commend Governor Ayade for this laudable initiative as our country makes steady and assured progress towards self-sufficiency in food production.”

In his address, Governor Ayade said the state was aware of the President’s focus which inspired the decision to invest in agro-allied industries which include the cocoa processing industry, banana Plantation, soya bean, calapharm, Instant noodles, rice mill, among others.

“These are all products of your discussion with me each time I have to meet with you and therefore, everything Cross River gives me and the entire people of Cross River credit,” Ayade said.

Ayade subsequently called for a standing ovation for the President, a directive which he explained: “I say so because we have five million hectares of paddy soil in Nigeria, unfortunately, less than 1.7 million hectares of that used to be cultivated; but since you came in with your aggressive program on rice, the amount of cultivable land has grown to three million hectares and it is rising.

He disclosed that the country used to spend about NGN460 billion importing rice and an additional NGN60 billion in December, which according to him, “has come down dramatically and saved the pressure on the naira, courtesy of your innovative thinking.”

The governor posited that with the population statistics, Nigeria faces a “humongous challenge that can lead to absolute social disorder if you don’t take a deliberate step to ensure that we improve on the rice demand and rice supply chain. “It was against this background that we realise that we needed to do something very specific on rice cultivation.”

Justifying the Modernization of rice production, Ayade argued that the old way of preserving rice seeds was outdated and counterproductive as the yield was always low, hence the need to go scientific in seed multiplication and preservation which made it “unacceptable for people to go into farming.”

“We needed to change and bring agriculture into a digital age and nexux. It is against that background that Cross River State under my watch and based on your advice, we focused on automated rice seed and seedling factory,” he said, adding: “We are just not stopping at providing seeds and seedlings, we have gone further to also set up the first vitaminised rice plant.”

In a bid to bring optimal value for the rice produced, the governor said it will also serve as a raw material for the instant noodles factory being set up by the state government.

Soliciting the support of the President, Ayade added that “We have done all we can, we can only pass it to the father of the country. This is your property, this is your product, this is a product of your intellectual acumen.”

The President was led on a tour of the complex by Governor Ayade amidst cheers from the large crowd that poured out to witness the historic occasion.