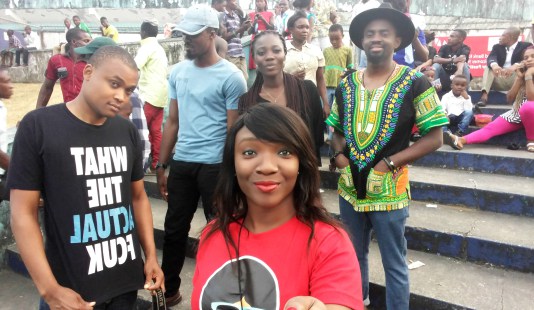 So, it’s no longer news that I took a trip down to Calabar, with a couple of my friends (social prefect tours) to experience the carnival in December. Trust me, there’s nothing compared to a good vacay to end the year, at least for me

and Calabar was amazing. The carnival, the culture, the FOOD and general atmosphere exceeded my expectations. Mbok, let me tell you about it

I obviously wouldn’t be able to share all the experiences in one post, so I’ll break it down to what we did daily. The tour took place from the 27th to 31st of December; four nights and five days (we returned on the fifth day).

On the 27th, we arrived at the Uyo airport and made our way down to Calabar, thanks to Ibukun, our new friend which who met at the airport the day before. Her boyfriend Maurice came to pick her from the airport and allowed us to join them. Let me explain to you briefly why we arrived at Uyo and not Calabar directly.

We had earlier booked our flight for the 26th and upon getting to the airport with glee, hoping that our 9:30 am flight with “Air Peace” would take off on time, we were disappointed when we had a one hour delay. One hour turned to two, then three and finally about 7 hours later by 4:45 pm, a man came to the waiting room to inform us that due to bad weather condition, our flight had been cancelled. Obviously, you can imagine how tired we were at that time. We had to wait all day to hear that and add to our tiredness the poor customer service of that airline, it was such a bad experience, we had already paid for the hotel (story for another day). The worst part is they couldn’t schedule us for another flight the next day, they claimed it was fully booked. Anyway, we had to book another flight for the next day and all the direct flights to Calabar were expensive. We finally settled on Arik air flying to Uyo as it was more affordable and Calabar was an hour 30 minutes drive from Uyo. Ibukun was one of disappointed passengers from the Air Peace flight and she also booked the same flight with us for the next day, so we immediately clicked.

Akwa-ibom is one state in Nigeria to watch out for. The development which has taken place in just a few years is quite surprising. I was really impressed; good standard roads, clean environment and a few attractive edifice. We only passed through, but it would have been nice to stop and visit one of their tourist attractions.

About an hour and half later, we arrived in the beautiful city of Calabar. Our Hotel, Royal Bits hotel was really nice, I didn’t take pictures of it (but you should check them out whenever you’re in Calabar) and their food was delicious. To add to that, it was located in a central area. The starting point of the carnival was right in front of our street, so all we had to do was walk down to where it was happening.

The biker’s carnival was interesting. As the name implies, it was a display of various bikers and the theme was ‘hot wheelz’. This was the first time a separate day has been dedicated to bikers alone and it actually made sense to kick off the 2015 carnival. According to the Governor of Cross river Ben Ayade, who is also a biker, he said that they decided to make a special day for bikers in order to attract more tourist and visitors to the carnival. From the business and tourism perspective, he noted that most bikers are well to do, because for you to afford a power bike, it means you can afford a good hotel and inevitably this would positively affect the tourism sector of Calabar during that period. Many bikers from different states in Nigeria and also International bikers from outside Nigeria participated in the Biker’s carnival.

This was my first time at the Calabar carnival and I was very excited. Bikers are always energetic and ever ready to show off their skills and this was no different. Some of the bikers even came in scary helmets to add more drama to the carnival. It was exhilarating.

We went back to our hotel at some point to eat and charge our phones and cameras. Did I mention how delicious the hotel food was? By the time we got back outside, the display had left our side and moved on to another part of the town. We went down to Marian road, but there was traffic caused by the carnival and by the time we got there, most people were heading back. We decided to look for somewhere to relax and have a good time. We had heard about Marina resort severally, so went there.

We visited the resort two other times in the course of this trip, so I’ll let you know more about it. They have a cinema there, so after looking around for a while, we decided to watch a movie. The decision was a good one, but the movie was a terrible one, jeez. We didn’t have so many more movies to choose from, so we had to settle. I won’t mention the name, so I won’t spoil their market. The movie ended around past 10 and the night was still young (during carnival period nighttime is always so alive) and we had earlier planned to turn up that night, so, turn up we did. There are different bars and clubs that people suggested to us; we settled for Jasper on Marian road. The Dj was quite good, from old school jams to current Naija songs, he had us dancing away. We spent about 3 or more hours there and left. That was how day 1 ended. It was quite an interesting day for us. It was more interesting because we had each other. Thanks to Toni, Laraba, Ayobami, Ani and also Ibukun and Maurice for making it memorable. Hope you enjoyed reading it, as much as we enjoyed the actual day?  Watch out for Day 2, lol.

Chiamaka Obuekwe popularly called Social Prefect is a Nigerian lady in her early 20s who is very enthusiastic about life. She shares her amazing journeys on www.socialprefect.net