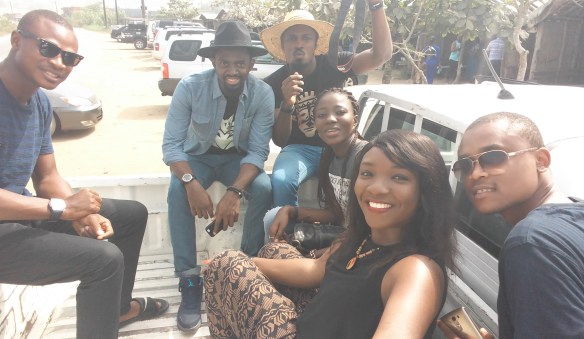 The fun in Calabar did not end after the carnival. Well the Carnival did not even end, we just wanted to try out other activities. I didn’t come all the way to just watch people dance and wear costumes, I also wanted to explore Calabar. I made some new friends and together with my old friends that I came with, we went to various places and had a fun-filled day.

Before going to Calabar, I had it in mind to visit Obudu Mountain resort, formerly called  Obudu cattle ranch. The place is really beautiful and I’m so sad I wasn’t able to visit. Already, several of my friends from Lagos had told me how far it is from Calabar and how I would not be able to return the same day. I was still stubbornly saying I would visit, in my mind I would leave very early in the morning and return early too. Until my friends in Calabar told me that it can take 6-7 hours to get to Obudu and 7 hours to return too which makes it 14 hours on the road. Ahh, apparently it was obvious that we would not be able to visit Obudu. So we decided to try other interesting places within Calabar. Hopefully we’ll be able to visit Obudu some time soon and we’ll have to stay somewhere within Obudu town not Calabar for the visit.

In the first post about the Biker’s carnival, I explained how I met Ibukun at the airport and we got talking and her boyfriend Maurice came to pick us up from the Uyo airport. They introduced us to some of their other friends. We met about 6 of their friends that day and it was really cool.

The first place we went to was Atimbo. It is this place where they sell bush meat basically. People go there from all corners of Calabar to eat fresh bush meat, boiled plantain with veggie sauce and Palmwine. Everything is served fresh and it was really delicious. It’s located in Akpabuyo local government which isn’t far from central Calabar. Getting there was not difficult at all, we took a cab which charged 500 naira or even less while Ibukun, Maurice and their friends drove down.

At Atimbo there are several open raffia joints and they all sell the same thing. The women were all calling  us to patronize them and we finally settled on one Mama Ijeoma’s stall.  We placed our orders and got served almost immediately. I really enjoyed the meal of boiled plantain, bush meat and fresh palmwine and I can say the same for all my friends. Except Toni though, he doesn’t eat any other thing apart from rice, lol but, he managed to taste this and said it was ok. Not so long after we finished eating, we saw two bikers drive down and noticed one of them from the Biker’s carnival because of his spectacular Octopus helmet and went to take pictures with him.

While leaving Atimbo, we decided to hop on the back of Maurice’s truck. It was my idea, lol, I can be extra adventurous and free during my trips. It was even better because we could not readily find a cab, well we didn’t really look for one. We rode at the back of the truck all the way to Tinapa. We were waving to strangers, singing and taking pictures, it was super fun.

Tinapa is located at the outskirts of Calabar and is about 30 to 40 minutes away from the main town. When we arrived at Tinapa, our entry was noticed. I mean, who wouldn’t notice 6 young adults at the back of a fancy truck car dancing and screaming, lol. It was really fun. Tinapa was interesting too. We didn’t really do any activity as there was none to do, except sightseeing, picture taking and shopping at one ridiculously cheap store.

The scenery at Tinapa is really fine. They have a hotel, Tinapa lakeside hotel, Water park, Studio Tinapa and a shopping center. The shopping center was almost empty, I don’t know if it was because of the season, but Christmas is supposed to be a season for more shopping isn’t it? I heard it’s supposed to be a Free trade zone, but I’m not sure how well that works out. We found one boutique that was doing a clearance sale and we bought brand new denim jackets for as cheap as 500 naira and jeans for 300 naira. It was ridiculously cheap and you can imagine, my friends and I all left with at least one or two items.

By the time we left Tinapa, it was already late afternoon and we had earlier planned to visit the museum at Marina resort but knew we would not be able to make it there on time. Ibukun, Maurice and their friends wanted to swim so we went to Monty suites. When we got there it was about 20 minutes past 5 and the swimming pool closes at 6pm, so they could not swim any more. We left not so long after and headed towards Marina resort.

Marina resort is this nice seaside historical resort in the heart of Calabar. It has a slave history museum, a seaside restaurant and another indoor one, it also has a hotel, carousel and playground for children, a cinema, a club and some other places. There are some water activities like speed boat cruise and jet ski that are fun to try out. Two of our friends did the speed boat ride and they enjoyed it. We watched a movie at the cinema, on our first day.

At that point, we were hungry again and decided to find somewhere to eat. We were already walking towards the restaurant at Marina resort, when one of Maurice’s friends suggested that we should go to one restaurant. I can’t remember the name anymore because we experienced the worst customer service there though the food was great. I ate Ekpankukwo for the first time and it was tasty. Imagine the waitress tried to cheat by adding almost 4k extra to our bill. There was small drama, then the manager came to add fire to the drama, jeez!. Anymore we finally settled it. We called it a day after a full day of activities. Some of them still wanted to go out but I was done for the day . I really enjoyed it thoroughly.

That’s pounded yam and Edikaikong. All of us ordered traditional food

So basically, if you visit Calabar there are tons of places to visit and activities to do. You just need to plan appropriately. Most of the real adventurous outdoor places are in other parts of Cross-river and are really far away from Calabar, like Obudu mountain resort, Afi mountain, Ikom monoliths, Kwa falls (not so far, like 1hour 30 minutes), and some other nice places. Stay tuned for the final post on our visit to Kwa waterfalls and the Slave history museum.

Has any of you been to these places in Calabar before? Kindly leave your thoughts below.

Love from the Social Prefect

Chiamaka Obuekwe popularly called Social Prefect is a Nigerian lady in her early 20s who is very enthusiastic about life. She shares her amazing journeys on www.socialprefect.net