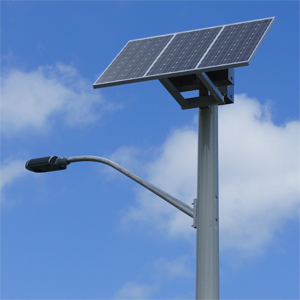 The Cross River State Government says it has installed Internet-enabled streetlights in the new industrial layout in Calabar, the state capital.

According to a statement on Thursday, the solar-powered Internet-enabled streetlights were installed at the industrial boulevard, located at the Goodluck Jonathan Bypass in Calabar.

The statement quoted Governor Ben Ayade as saying that the high-tech technology was “the first of its kind anywhere in the world.”

According to the governor, the four megawatt hi-tech solar independent power will provide twenty-four hours electricity to the industrial area.

To benefit from the initiative are the Rice City, the Calabar Pharmaceutical Company and the Calabar Garment Factory all of which employ no fewer than 15,000 citizens in the state.

While inspecting the project in company with a team of German engineers, Ayade said the new technology would power the factories at less cost while guaranteeing the highest quality of power to the industrial hub.

The governor said, “We are very happy to have this team in Cross River with their latest German technology to give us uninterrupted power supply within the Ayade Industrial Complex located here along Goodluck Jonathan Byepass.

“We have abundant sunlight in Calabar which will be converted to solar power with  one megawatt in each of the five project sites that makes up the Ayade Industrial Complex.”