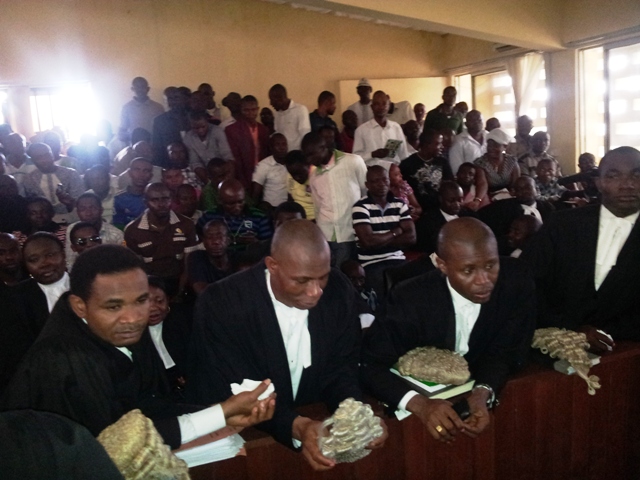 Mr. Jeremiah Archibong, a CrossRiverWatch correspondent had his phones seized in court yesterday and was briefly detained by the duty police officer in court for allegedly recording court proceedings.

CrossRiverWatch gathered that the phones were seized when one of the accused persons (Inspector Gershom), recognized the correspondent and raised alarm that they were being photographed by a journalist.

The phones where then seized by a court duty police woman though without the notice of the Judge.

But when the correspondent approached the court staff for his phones shortly after court sitting, he was told the phones have been handed over to the Judge.

In his reaction, Mr. Archibong told this reporter that, “While the court was on break, the police woman attached to the court room approached me for my phones after she was informed by GERSHOM, whose wife had in less than two minutes before then, gone to him and told him who I am and that I’m recording.

“The accused all threatened to deal decisively with me and even their colleagues who brought them to the court, the short one amongst them, in particular (their escort) said I will regret and that they will come after me for everything we have been writing about the matter in CrossRiverWatch.”

The Publisher of CrossRiverWatch and Editor in Chief, Agba Jalingo also reacted to the development in court.

While speaking with this reporter, he said “With due and deserved respect to the honorable court, I will say that our reporters and correspondent are properly trained and groomed on bit responsibilities and we do not encourage anyone of them to break the rules of the court.

“Having said that, I must add that, the management of this organization is writing a letter that will be delivered before the end of today to the State Commissioner of Police and State Security Adviser and based on legal advice, we will also put the court on notice that our reporter has come under grievous threat from accused murderers and their allies for doing his work and that the police and other relevant authorities should ensure that these threat is not carried out knowing quite well that those who are threatening have the capacity to execute the threat having been earlier indicted for murder by a police investigative committee.”