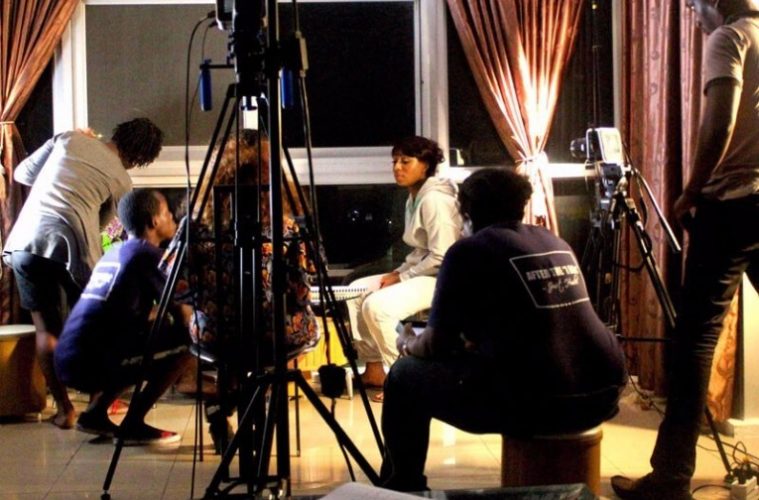 Almost seven years after the first edition took place in Tinapa, Calabar, the Africa International Film Festival has become a cultural behemoth, drawing the attention of the world to mankind’s original continent.

This year, in January, the French Government invited Chioma Ude to France, to discuss film. She met with key people in the country’s Foreign Affairs Department and struck sweet deals that could change the face of filmmaking in Africa. “I had good talks there,” she told this reporter.

Ironically, Ude is not a filmmaker. She does not haul huge cameras across movie sets or shout instructions to slacking actors or owe banks huge sum of money for a flop at the box office. She is the Founder and Executive Director of the Africa International Film Festival (AFRIFF), a celebration of filmmaking and filmmaking talent on the continent.

Ude’s expertise, she told this reporter, is in raising money for filmmakers and setting them free to push the boundaries of their creative powers to tell Africa’s most important stories. “You have to find what gives you joy, and for me this is it,” she said.

This year, AFRIFF, which is scheduled to run from October 29 to November 4 in Lagos, has reached significant agreements with the French and British Governments to promote film diversity and development in the country. And the American Government has also shown rabid interest in partnering with the festival.

The French Government, acting through its Consul in Lagos, is set to screen five French films at the upcoming festival for two days. “The importance of AFRIFF, that is growing year after year, is a wonderful showcase for us,” the French Consul General, Lagos, Mr. Laurent Polonceaux, said, while describing AFRIFF as “one of the most important film festivals in Africa.”

Also, the British Government, acting through the British Council, its foreign agency for cultural relations and educational opportunities is bringing London’s British Film Institute (BFI) into a new partnership with AFRIFF. Tagged ‘Film Connections’, the partnership also aims to share knowledge and boost co-production opportunities between filmmakers from Nigeria and the United Kingdom.

AFRIFF is a laudable idea and it is gradually becoming one of the biggest international film festivals on the continent,” a filmmaker, Patrick Uduak-Obong, told this reporter. “The festival’s growth has been steady and every year it gets more interesting.”

“These international partnerships mean more opportunities, more exposure; and that’s what the film industry needs now, to be able to showcase their work beyond the shores of Nigeria,” Uduak-Obong added. “I’m also hoping that this partnerships will set the stage for the enacting of policies that will help the industry grow faster.”
A film critic, Ife Olujuyigbe, attended the festival in 2016 and was awed by the variety of personalities on display. “I saw people from the United States, from Egypt and from other parts of the African continent,” she said. This sort of initiative “helps filmmakers connect beyond film sets and accidental bumpings-into”.

Teach us how to do cinema, sir. For decades, African cinema has been under fire for producing low quality movies, compared to its western counterparts. The huge chunk of this criticism is directed towards Nollywood, Nigeria’s film industry and the major supplier of African cinema content. In 2010, the BBC questioned whether Nollywood was destroying Africa’s young film industry with its mass production of low quality content. However, in recent times, with the advent of festivals like AFRIFF, that narrative is changing.

One of AFRIFF’s most significant contributions to the film industry has been the creation of a quality talent pool. Every year, the festival trains hundreds of students in various aspects of film making and frequently sponsors its students to foreign schools for world class skill development.

In 2013, Oto Obong Ekpenyong was at that year’s AFRIFF in Calabar, where he attended a training on Sound for Film. The next year, he was at the festival, again, to learn Cinematography. In 2015, Ekpenyong attended a Documentary Filmmaking workshop at Montana State University (MSU), courtesy of AFRIFF and Ford Foundation.
“The experience of each has been, in one word, empowering,” Ekpenyong told this reporter.

Ekpenyong is currently working on his debut film project – a social and human interest documentary with a social justice. The published first phase of the project is currently doing festival rounds and premiered at Silicon Valley African Film Festival (SVAFF) 2017 in California. It has also been officially selected to screen at this year’s AFRIFF in Lagos.

“I have said this elsewhere before and it bears repeating here: if the filmmaking community is going to produce compelling documentaries, then the requisite genre-specific trainings, such as AFRIFF/MSU Social Justice Documentary Filmmaking workshop, should be provided,” Ekpenyong said. “As for the festival as a whole, AFRIFF has been one of the most important film festivals in the continent that champions and celebrates African cinema. And yes it is fantastic for film in Africa not only because of the cinematic experience, film business networking, industry sessions, masterclasses and workshops it programmes but also for the cultural collaborations it fosters.”

For Jennifer Nkem-Eneanya, the AFRIFF screenwriting masterclass facilitated by Tunde Babalola in November 2016 was an eye-opening experience into not just the art, but the business of screenwriting. “We had a week long expose into the inner workings of the Nigerian film industry for writers and received valuable tips and advice on how to grow and succeed in the industry,” she said. “In addition, we evaluated screenplays and movies and learned the international best practises for screenwriters as well as the use of screenwriting software. Our facilitator was candid about the challenges he faced but upbeat about our chances of soaring in the industry while armed with the right knowledge which AFRIFF was providing for us free of charge.”
A screenplay Nkem-Eneanya started in class – ‘For My Girls – has now been produced and is currently attracting rave reviews.

“AFRIFF is a great push for Nollywood and for the film industry in Africa,” she told this reporter. “While it showcases different calibre of filmmakers and films from shorts to animations, it also invests in talent development of budding writers, actors and filmmakers and fills a void which no other organisation has sufficiently provided for. In addition, it provides a trustworthy platform for investors to connect with filmmakers on a global level. Several first-time filmmakers have made their festival debut at AFRIFF and it affords everyone the opportunity to stand on a level playing ground irrespective of years of experience and film budgets. AFRIFF celebrates excellent filmmaking without recourse to gender, age or clout.”
Raising the bar

The Pan-african Film and Television Festival of Ouagadougou (Festival panafricain du cinéma et de la télévision de Ouagadougou or FESPACO) is a film festival in Burkina Faso, held biennially in Ouagadougou. It accepts for competition only films by African filmmakers and is regarded, by many, as the oldest and biggest film festival for French-speaking Africa. For English-speaking Africa, however, AFRIFF, arguably, is the destination for a premier celebration of film.

Founded in 2010, AFRIFF has grown in leaps and bounds, strengthening its position with each edition. The size and reach of Nollywood, undoubtedly, helps its cause: it is impossible to break into African cinema without coming to Nigeria.

“We’ve grown so fast because we’ve been consistent,” Ude said. “And Nollywood is about 70 per cent of African cinema, so this is the hub of film in Africa. This means that the energy has to be different.”

This year, the festival has reduced the size of its competition categories to increase competitiveness. The breadth of film selections has also expanded. In the feature film category, only three out of 15 films are Nigerians.

“Most Nigerian filmmakers now know that to get into AFRIFF’s competition category, you have to strategically position your film in certain ways,” Ikenna Ezenyirioha, the guy who oversees AFRIFF’s programming, told this reporter.

So the bar keeps rising for AFRIFF. It is not amiss to assume that the festival, in terms of its impact on the continent, is its own sole competition.