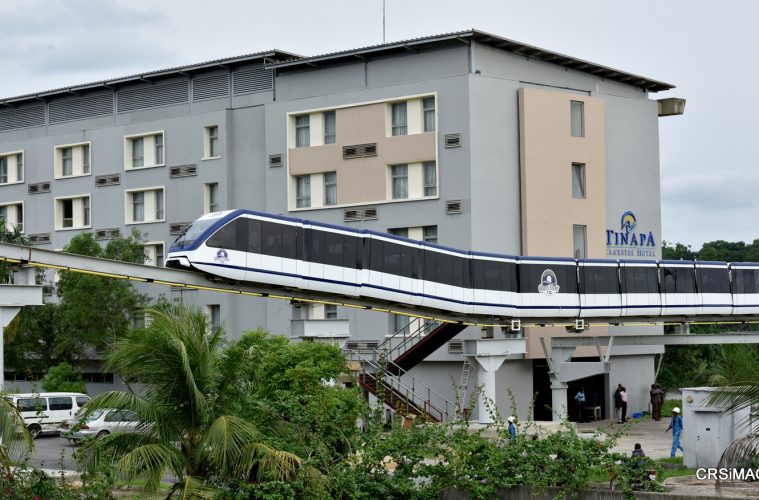 CALABAR MONORAIL: WE ARE WAITING FOR A DATE FROM THE PRESIDENCY FOR ITS INAUGURATION – CHRISTIAN ITA

Mr. Christian Ita, Chief Press Secretary to Gov. Ayade has confirmed that the multi-billion Naira Calabar monorail project is completed and would soon be inaugurated by President Muhammadu Buhari.

Mr. Ita disclose this while speaking to newsmen in Calabar, saying “It is awaiting inauguration; we are waiting for a date from the presidency for its inauguration.” Gov. Ayade on a test ride with AMCON boss

Built by Ponet TFZE, the train with a cruising speed of about 40 kilometres per hour, has 12 cars, including 10 passengers and two equipment cars. Each car is primed for seven to eight passengers all seated, while the train’s length, width and height are approximately 38, 1.95 and 2.2 metres, respectively.

The parking space at the train’s take-off point at Tinapa can conveniently accommodate 150 cars. When fully operational, the electricity-powered air-conditioned train with 1.62 metres height approximately in its passenger compartment would provide a 24-hour service. Gov. Ben Ayade had recently in Calabar disclose to newsmen that the state government was determined to extend the facility to Margaret Ekpo International Airport, Calabar, as panacea to envisaged congestion of the city centre through rapid investments inflow.

“Right now, the Calabar Monorail is ready for use pending inauguration by appropriate authorities. We have test-run the system and confirmed its readiness. Gov. Ben Ayade was here with his team to see for themselves what is on ground”

“Tourists troop here on daily basis to take a ride but were disappointed as they were turned back. We always give the excuse that although services are ready, they can only have their way when it is officially inaugurated.

School children on excursions, families and other curious residents, who have not seen this kind of train before, have been coming to feed their eyes and seeking to take a ride.’’ He said.