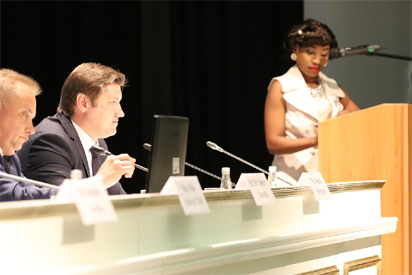 FROM CALABAR TO THE WORLD: WOFAI SAMUEL CHAIRS MINISTERIAL PANEL FOR THE BELARUS-AFRICA FORUM

International media personality, Wofai Samuel has continued to do her bit in drawing the attention of the rest of the world to Africa.

The forum had in attendance dignitaries from both African and European countries who were selected from various walks of life.

Cross River state born Wofai Samuel, engaged ministers and prime ministers in an objective but very detailed and frank conversation which was segmented in two phases and lasted over two hours. Samuel who was the moderator asked about the growth and development opportunities offered by the Eurasia union Africa partnership, asking them to highlight steps that should be taken to seize advantage of these opportunities because the market is dynamic.

Valentin Rybakov, Vice Minister for Foreign Affairs of Belarus, said that his country believed that the time had come to enhance relations with Africa and identified the areas of common interest to include agriculture, land development, industrialization and public development.

He said that with the increased Belarusian focus on Africa; the country’s trade with the continent had grown from almost no value a few years ago to current annual figures running into millions of dollars. In all, Wofai Samuel visited four countries namely: Russia, Ukraine, Turkey and Belarus to celebrate a successful hosting of the forum.