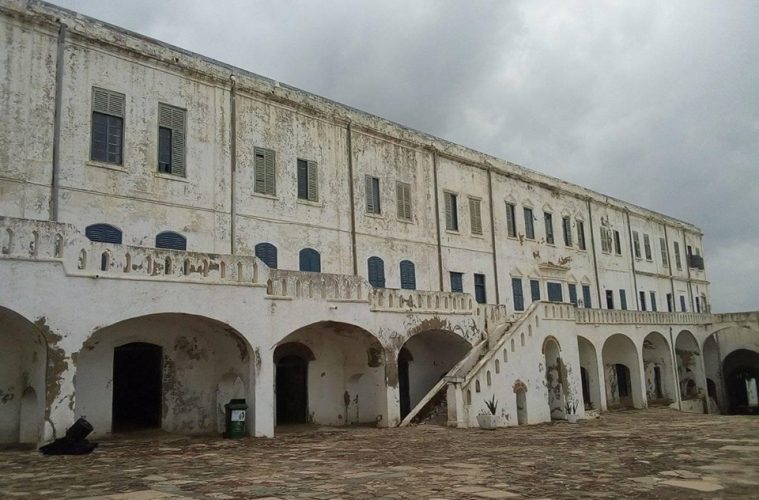 It was a beautiful time to return to Ghana as the country commemorates 400 years of African slavery tagged “The Year of the Return, Ghana 2019” to encourage people of African descent to trace their ancestral roots and return to Africa.

As part of Accra Weizo 2019 Fam Trip, We took a tour of one of Ghana’s gripping history of slave trade – The Cape Coast Castle.

Cape Coast Castle is a European-built fortress situated on the central coastline of Ghana. Since its initial construction in 1652, the Castle served as a trading post for European nations and as the headquarters of British colonial administration for the Gold Coast Colony.  Today, the Castle is a designated UNESCO World Heritage Site.

Throughout the 18th century, the Castle served as a “grand emporium” of the British slave trade. Thousands of enslaved Africans, sometimes from hundreds of miles away, were brought to Cape Coast Castle to be sold to British slave ships. During the interim period, Africans were imprisoned in what the British called “slave holes,” or dungeons in the basement of the Castle that had little ventilation and no windows.

Up to 1,000 male and 500 female slaves were shackled and crammed in the castle’s dank, poorly ventilated dungeons, with no space to lie down and very little light. Without water or sanitation, the floor of the dungeon was littered with human waste and many captives fell seriously ill. The men were separated from the women, and the captors regularly raped the helpless women. The castle also featured confinement cells — small pitch-black spaces for prisoners who revolted or were seen as rebellious. Once the slaves set foot in the castle, they could spend up to three months in captivity under these dreadful conditions before being shipped off to the New World.

An environment of harsh contrasts, the castle also had some extravagant chambers, devoid of the stench and misery of the dungeons, only a couple of meters below. For example, the British governor and officers’ quarters were spacious and airy, with beautiful parquet floors and scenic views of the blue waters of Atlantic. There was also a chapel in the castle enclosure for the officers, traders and their families as they went about their normal day-to-day life completely detached from the unfathomable human suffering they were consciously inflicting.

When the British abolished the transatlantic slave trade in 1807, 90% of the British commerce on the Gold Coast was rendered illegal.

The Castle then served as the head of English administration of the Gold Coast until 1877, when the colonial government moved its headquarters to Christiansborg.  Since then, the Cape Coast Castle has functioned as a provincial Centre, complete with a law court and a school.

After Ghana gained independence in 1957, the Castle underwent an ambitious restoration project sponsored by the Ghana Museum and Monuments Board. Today the Castle is a museum that encourages tours of the old slave-holding dungeons. Walking through the slave castles, brings a mixed feeling of sadness and educational. These castles are filled with haunting histories, revealing the horrors of the slave trade.

The “Point of no Return” which marked the beginning of the slaves’ perilous journey during the slave era and the last memory of their homeland before being shipped off across the Atlantic has been renamed today the “Door of Return” above the other side of the door facing the ocean by the Ghana Authorities in commemoration of the “Year of the Return, Ghana 2019”.

* Chief Officer: The Regional Director Ghana Museums and Monuments Board