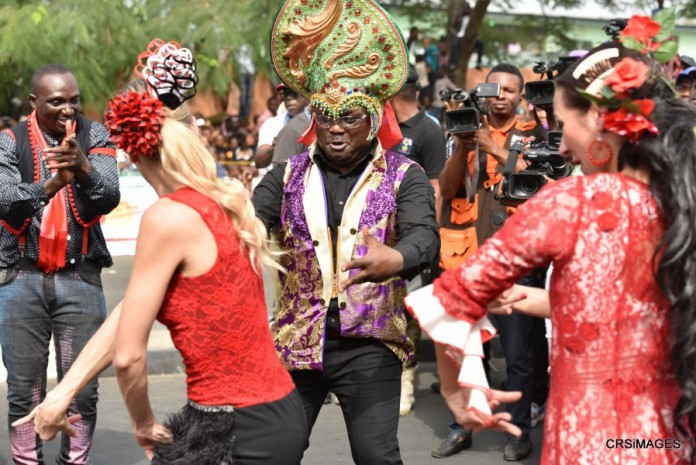 The 11th edition of Carnival Calabar was held with the theme on Climate Change.

Governor of Cross River State, Professor Ben Ayade says the selection of the theme “Climate Change” was to make the people and the world more conscious of the need to do all it can to protect the environment.

The event attracted the participation of countries such as Brazil, Spain, Italy, Rwanda, Kenya, Belize, Burundi and France.

Governor Ayade was accompanied by his wife, Linda Ayade; the immediate past Minister of Culture and Tourism, Edem Duke, top Nollywood actresses Patience Ozokwuo, Eucharia Anunobi and Rachel Oniga, while Senator Florence Ita-Giwa leader of Seagull Band identified in red had a star studded float on the move.

Carnival Calabar had 5 main competing bands identified by colours such as Blue for Bayside, Red for Seagull, Masta Blasta in Orange, Freedom spots Yellow and Passion 4 always in different shades of Green.

The 12 kilometre walk through designated streets of Calabar had revellers perform at three adjudication points along the route with the final judging arena being the main bowl of the Calabar sports pitch known as the U.J.Esuene Stadium.

Passion 4 band return to its winning ways as they emerged winners of the Carnival Calabar 2015 band competition, with Seagull band in second position and 2014 winners Masta Blasta band coming in third position.