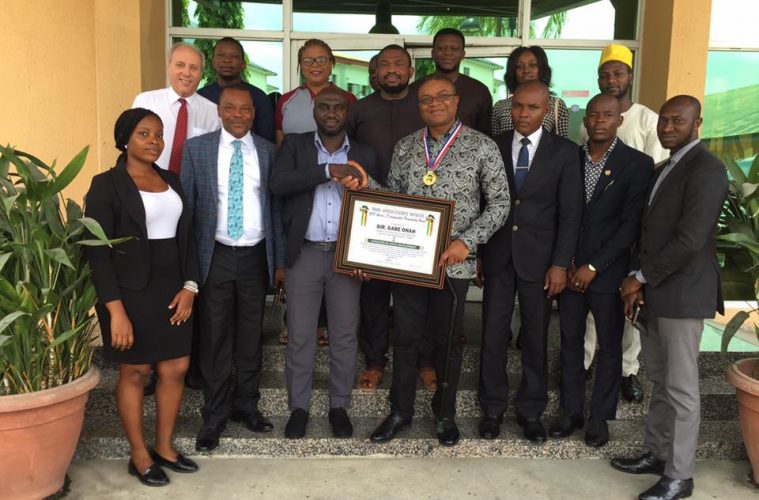 The award “Vanguard of Africans Development” was presented to the Chairman at a ceremony held at 520 Hotel in Calabar, Cross River State capital.

The student delegation led by the secretary General of the association, Mohammed Ibrahim said the award was to encourage Individuals and bodies worthy of emulation who have shown exceptional contributions to Africa’s quest for sustainable development in manifold capacities over the years. Speaking before the formal presentation of the award, he described Mr. Gabe Onah as simply a reflection of a man of substance whose lifestyle and achievements deserves to be appreciated.

“For if i were to show you a young determined Nation builder attributed with honor, greatness and valor yet so humble to the core, I would introduce to you to non-other than a seasoned intellectual and an uncommon achiever in the person of Sir Gabe Onah, ” he said. According to the award citation, it read “Sir. Gabe Onah, an indigene of Yala Local Government Area of Cross River State Nigeria, is a seasoned cultural promoter, an erudite tourism development expert and an astute administrator with top notch managerial skillset. His journey to accomplishment dates as far back as his early years where he showed signs of precocity and ingenuity performing distinctively in different undertakings and surpassing his peers in various endeavors educationally, psychologically, spiritually and otherwise, his educational pursuit saw him acquiring his bachelor and Masters Degree at the Prestigious University of Calabar, Cross Rivers State Nigeria where he majored in Theatre Arts and Media Studies”.

“In further pursuit of professionalism he acquired a number of professional degrees and certifications in Tourism and Management from the Tourism Product Development Company Jamaica and the United Nations World Tourism Organization amongst others”.

“Sir Gabe Onah started his career life with the state government in 2001 as the Governments Spokesman and as Special Assistant on Information to the Governor of Cross Rivers State, Nigeria. In the year 2003 he was deployed to the Department of culture and tourism and later in 2006 appointed to serve as the managing director of the cross rivers state tourism bureau. Following a new administration in 2007, the then Governor appointed him as the chairman of the states carnival commission and as special adviser on tourism to the government. “Over the years his resourcefulness and ingenuity has seen his services sorted on various tourism framework, he has seen to the dispensing of Top-Notch service delivery, making noteworthy contributions, prompting land mark achievements, making innovative collaborations towards cultural exchange, setting a pace for culture promotion and tourism advancement amongst others. His exceptional servitude reformed the states cultural carnival having hosted it for over 10 years, seen to the participation of over 30 countries and made it the largest carnival in Africa. It is also worthy of note that he has inspired other states in Nigeria and countries in the world to embrace the beauty of Art and Cultural Development having brought to bare the positivity in showcasing it”. In his response, Mr. Gabe Onah said he accepted the award after scrutinizing and doing a background check on the organisation.

Mr. Onah expressed gratitude for the award and pledged to keep working hard for the betterment of the African continent.

“While further accepting this award as a team, i give kudos to the political leaders who have given us the opportunity to serve. For us Carnival Calabar is our platform to unite common humanity but first Africa, it’s God’s gift to us”, He further added.

The award presentation was also witnessed by officials of the State Carnival Commission and Tourism Bureau.