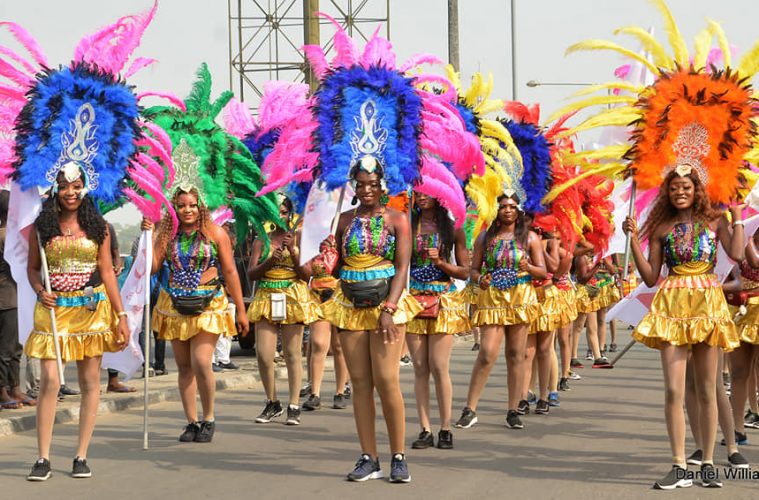 The 2019 Carnival Calabar lived up to its billing as Africa’s undisputed biggest street party in every aspect.

Franklin Ihejirika who was at the recently concluded Carnival Calabar in Cross River state reports on the unique features of the 2019 celebration which keeps getting better every year.

Fifteen years after, Carnival Calabar is still waxing stronger, soaring higher, surpassing all expectations in the area of tourism, pure and uninterrupted entertainment.

When it was started fifteen years ago by the then Governor of Cross River state, Mr Donald Duke, a lot of people believed that the carnival which is today rated as number one in Africa and fourth globally will not survive not to talk about achieving this great feat.

The Carnival has now metamorphosed into a global brand thus placing Calabar on the global tourism calender and thereby making Calabar the place to be every December to enjoy the best of hospitality, entertainment, beautiful dance steps in a serene environment.

With the attainment of one unprecedented height after another, interpretation of one unique theme after another every year, the Carnival has become African flagship tourism and entertainment event.

According to the Carnival Calabar Commission, the 2019 theme: Humanity is timely and relevant as it seeks to challenge mankind that every human being has a right to existence as the idea is to remind human kind not to be a source of pain to itself or other persons lives.

The 2019 edition of the festival was a spectacle to behold as usual with the best of undiluted entertainment and fun.

Since the coming of professor Ben Ayade, the Governor of Cross River state with his unique style, the Festival has taken a new dimension with the introduction of the international Carnival, bikers parade which the Governor participates in, Mrs Africa pageant, the Governors band, youth carnival, green carnival, the event has re-positioned the state on the path of sustainable tourism growth using music, dance, entertainment, cuisines and all others.

The carnival has been transformed and re-positioned into a veritable platform for African discourse, constantly bringing topical issues to the fore.

Expressing joy for being in the country for the event, one of the female dancers from the USA after the initial flight hiccups where the flight was rescheduled for the next day, asked in anger, ” so am not going to be in Calabar today, what am I going to be doing in my hotel room in Lagos, is going to be to boring and I will be too bored, I want to be in Calabar”.

On landing in Calabar the next day with excitement and enthusiasm, the international contingents on the flight made up of USA, Belize, Kenya, Mexico and others burst into jubilation by applauding the pilot on touching down at Margaret Ekpo airport, saying, ‘we are in Calabar at last’.

Debra the participant from Belize said she is so excited to be in Calabar to be part of the fun.

“Since I was informed about my coming to Calabar for the carnival, though not my first time, I have been patiently waiting for the date to draw nearer in order to be part of the show, you can see the excitement all over me, and I thank the organisers, the government and people of Cross River for the opportunity to be here,” Debra stated.

The chairman of the Carnival Calabar Commission, Mr Gabe Onah stated that the carnival bands recorded a tie some four years ago.

In the results announced by Onah, Seagull Band came second with a total of 1581 points, followed by Bayside Band with 1453 points as third position and Masta Blasta with 1466 points as the fourth position.

In other categories, Seagull Band emerged the best king of the road with 1173 points and best theme with 1161 points while the best decorated truck and best costume band went to Passion 4.

The chairman of the Carnival Commission disclosed that Carnival Calabar ranked number one in Africa, 4th globally.

According to him: “Carnival Calabar has received documentations being listed in the carnival calender’s of the world as the first in the whole of Africa and the fourth in the world.

“In the last five years, we have seen challenging theme, critical themes, cerebral and mostly intellectual in content, Yesterday you saw God’s gift to Cross River State and Cross River State gift to the world.

His Excellency energised the bands and adds excitements and that this is what drives tourism to a destination and it happens. For the first time, we are urging everyone here to see the new look carnival marking scheme called the high low, we have trained our adjudicators in Trinidad and Tobago. It was this same Governor that renewed our patent as a registered trade mark , four weeks ago, we received documentation being listed in the carnival calender’s of the world, listed as no four in the world and the first in the whole of Africa. We have observers from Trinidad and Tobago, in the persons of Mr David Lopez and Patricia D.

Dureni , they found Carnival Calabar worthy, four weeks ago after two years of trial, they came here as mystery visitors and gave us the go ahead and we thought they should come here to see what they saw online”.

For the international Carnival, the judges said that all participating countries did their best in their performances. But of special mention is Patatrak Circus that wowed the audience with their unique and acrobatic display that left the audience well entertained.

Also, the dancers from Lesotho and Swaziland with their unique and natural appearance which captivated the audience.

While declaring the 2019 Carnival Calabar cultural festival celebration open, Cross Rivers State governor, Ben Ayade stressed the need for free movement of Africans within the continent, adding that it will improve tourism growth and increase economic and commercial activities in Africa.

He said border closure by countries within the continent has created bottlenecks for people who would love to travel from one place to another, stating that it negates the divine principle of humanity.

Governor Ayade advocated for a reduction of wealth from extremely wealthy countries to those with extreme poverty so as to strike a balance, adding that by so doing the society would once again become a happy place for all to live.

The international festival attracted participants from over 30 countries which include Mexico, USA, Bangladesh, Egypt, Kenya, Czech Republic, The Gambia, Rwanda, Lithuania with their beautiful (Pyrotechnics and fire works), Ukraine, Botswana, Ethiopia, Tanzania, Swaziland, Belize, Ghana, Lesotho, two different bands from Rio de Janeiro and Sao Paulo all from Brazil, Patatrak Circus, a team made of participants from France, Senegal and other countries among others.

The 2019 Carnival Calabar lived up to its billings as Africa’s undisputed biggest street party both in attendance, participation and ratings.