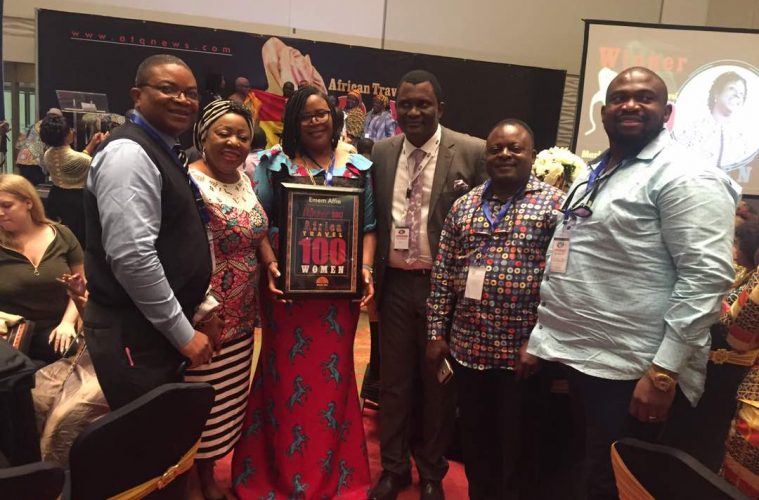 The team led by the Chairman, Cross River State Carnival Commission, Mr. Gabe Onah showcased the state as a preferred destination for leisure and business tourism in Nigeria and Western Africa.

Over the years, Akwaaba has grown to become an important Africa Tourism marketing platform in the region drawing attendance from over 7,000 to 10,000 Visitors from 20 Countries. Among the exhibitor’s included national tourism organizations, numerous airlines, both domestic and foreign; and leading Africa hotel chains, destination management companies. Cross River state team celebrating with Sen. Florence Ita-Giwa and Mrs. Eme-Affiah on their award as Top 100 Women in Africa Travel at AKWAABA 2017

The organizer of the travel show, Mr Ikechi Uko noted that the 100 Africa women in travel award became necessary considering the role of women whom he pointed out constitute seventy percent of the workforce in the tourism industry.

Additionally, participants at Akwaaba Africa travel had the opportunity to have a first-hand glimpse of the biggest street party in Africa as the beautiful Carnival Calabar revellers performed at the opening and closing ceremony.

Speaking at Akwaaba opening ceremony, the Director General of Nigeria National Council of Arts and Culture, Otunba Olusegun Runsewe applauded the organizers of Akwaaba and said that soon oil will be given a break as culture & tourism will now become the country’s new oil.

During the travel show, a number of events featured among them; the Chef Challenge a culinary event aimed at promoting culinary tourism by showcasing the best of Africa’s hospitality, a conference on Aviation in Africa with the theme “One-year commercial aviation accident free year. What did Africa do right”, a discussion for women in tourism and a conference for youth in tourism. Performers at the opening ceremony of Akwaaba 2017 exhibition in Lagos