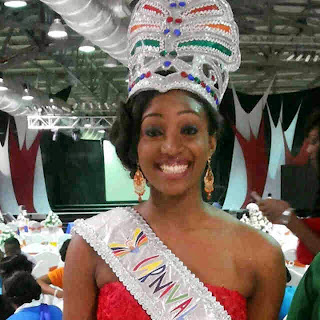 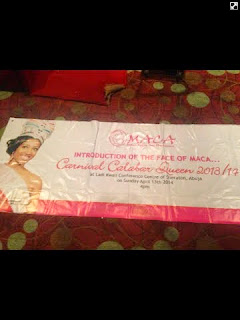 Nancy Olive -Aisaghonhi, the Calabar
Carnival Queen 2013/2014, was on Sunday April 13 officially unveiled to the public and development partners as the Face of Mothers Against Child Abandonment (MACA).Olive-Aisaghonhi is working with MACA, an NGO established by the Cross Rivers State First Lady, Obioma Liyel-Imoke to reduce the high rate of child abandonment and child destitution in the Niger-Delta state and the country.Speaking at the glitzy event held at the
Sheraton Hotel Abuja and attended by
dignitaries like Chief Edem Duke, Minister of Culture, the beauty queen urged that more individuals, groups and members of the private sector collaborate with organisations like MACA to prevent the sad occurrence of
abandoned babies as well as reduce the
number of street children.Backing her call for action with statistics which shows that 12 per cent of street children across the world are girls who have suffered different forms of abuse, she decried the fact that parents and in some cases, the society have failed children.Olive-Aisaghonhi, however, said that there was hope for street children as organisations such as MACA have taken up the fight to significantly reduce child abandonment and the growing menace of street children. The queen expressed joy that she and past Calabar Carnival queens have taken the message of avoiding high-risk behaviour that
exposes youths to unwanted pregnancies and STIs to over 50 thousand students.She said: "We in MACA have seen children living conditions that made we adults wonder how they survived. I make the call to get them off the streets and to prevent children
from being abandoned. My goal and that of MACA is to significantly reduce teenage pregnancies, promote informed choices as well as reduce STI and AIDS infection".Founder of MACA, Mrs. Imoke, described the beauty queen as the right spokesperson for her foundation as the younger generation can easily relate with her. Tagging her as role model worthy of emulation, the First Lady
asked her friends in the public and private sector to support Calabar Carnival Queen in her drive to prevent youngsters from taking bad decisions that lead to cases of child abandonment and unsafe abortions.