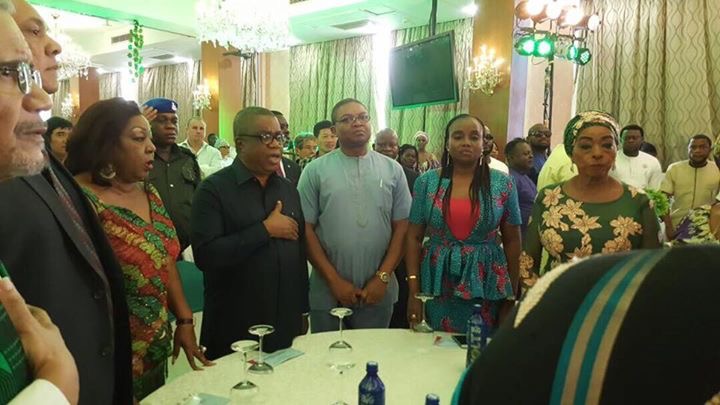 For the first time in the history of Carnival Calabar, Senator Florence Ita-Giwa’s led Seagull Band has embarked on a touring show of performers to drive the messages on topics around Climate Change to wider and more diversified audiences.

The event which held at the Ballroom of Oriental Hotel, Lagos recently was put together by Seagull Band, one of the five bands of the Carnival Calabar at a symposium titled “An evening of lecture and stage presentation of the Seagull winning theme of the 2016 Carnival Calabar” edition which dwelt extensively on climate change and the need for an affirmative action to manage the environment on a sustainable basis. Special Guest of Honour, Senator Ben Murray-Bruce spoke through one of his brothers, Mr. Guy Murray-Bruce . He reiterated the utmost importance of heeding the warning signs which were already evident everywhere that humans are fast destroying the fabric of eco-balance that holds the world together.

The Deputy Governor of Cross River State, Prof. Evara Esu said he was at the event to demonstrate the importance that the state government attaches to the annual Carnival Calabar.

Prof. Esu invited all the participants at the symposium to the 2017 edition of Carnival Calabar, adding that the theme of this year’s programme is Migration, which is how people are dying in Sahara Desert trying to seek greener pasture in other countries.

He said the state would also unveil a new city to be called Calasvegas in December during the carnival. In her opening remarks Sen. Florence Ita-Giwa stated “We have turned ourselves to climate change ambassadors and now we are going around to do presentations; so that Nigerians can learn. We want to use this opportunity to disseminate information on the issues of climate change. We want Nigerians to know that Climate change is real.” Keynote speaker, Mr. Desmond Majekodunmi who is the Chairman of Nigeria Conservation Foundation Committee on Fund Raising and Awareness painted a horrifying picture of the possibility of Lagos and other Nigerian coastal states going completely under water. But he raised hope that it was possible to put it in check if we take certain proactive actions.

The Chairman of the state carnival commission, Mr. Gabe Onah who led a team of officials likened the carnival to an oil well and said that Carnival Calabar is the next big thing after Nollywood that projects the good image of Nigeria and has the potential of earning foreign exchange for the country through increased number of tourists into the country.

The audience at the Lagos show had the likes of Mrs. Abba Folawiyo, the Emperor of Iwo, Dr. Arnold Udoka and his wife, Pamela.

The show was assisted by partners like Heritage Bank, NIMASA and Big Cola.

Watch a preview of the event: