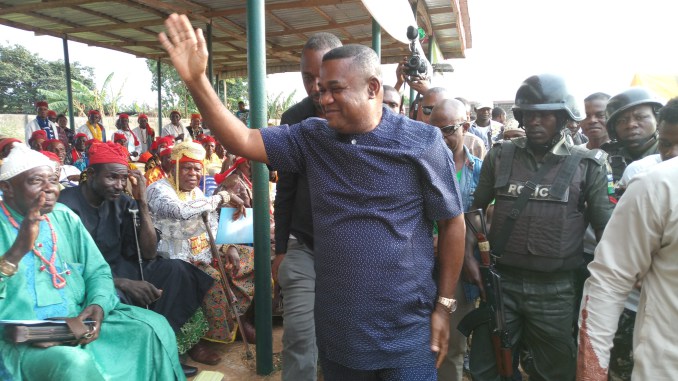 CHRIS AGARA ENDORSED FOR SENATE BY THE PEOPLE OF OBUBRA

The people of Mbembe of Obubra Local Government Area of Cross River State had on Thursday endorsed Chief Christopher Agam Agara to run for the Central Senatorial District seat come 2019.

The endorsement witnessed a turnover of multitudes, all pledging their support for the well established Business man. The multitude comprised of over 20 groups, ranging from students group, women groups, youth groups, political groups, community groups, etc.

Speaking during the endorsement, Hon. Friday Okpechi, Member representing Obubra 1 at the Cross River State House of Assembly said, “It is a wonderful thing and for the very first time we’d have an Mbembe child in the Red Chamber; we have never had it before. We have a member in the House of Representatives, we have in the State House of Assembly; this is the time an Mbembe son would mount the Red Chamber and I am very happy.

“We want him to go and shine and dominate the Red Chambers and bring the glory to God and to Mbembe man”.

Okpechi further disclosed that, it is destiny that has brought the Mbembe people into this glorious path after a long while. “Destiny! That is why it is our turn today. Before now, other people have been having their turn, this is our turn, we are going to take it because God has designed it this way”.

Hon. Peter Egba, Cross River State Commissioner for Commerce and Industry said for the first time in the history of Obubra, Mbembe child is vying for such a position.

“For the first time an Mbembe son is running for such a big position, and we are glad that it is Chris Agara, our mentor, the bridge builder. We, the entire Mbembe people are here to endorse him. We are saying he should go to the Senate of the Federal Republic of Nigeria to represent the people of the central senatorial district.

“As a private man, he’s done so much for the Mbembe people and therefore when we’ll give him our mandate, for we believe that he’ll do more for us. If he can do all the things he’s done for us with his personal funds, capacity, when he gets to the Senate Chambers, he will take the problem of the Mbembe people in his shoulders and to ensure Obubra will grow higher and higher”.

The Motion for the endorsement of Barrister Chris Agara was moved by Dr. Felix Aya who said the philanthropist is hereby adopted by the people to run for the position of a Senate. He said, “I am here to carry out a simple task, and the task is to take a step that even God has ordained.

“I am here to move a motion for every Mbembe people whether home or abroad to endorse our son, Barr. Chief Distinguished Statesman, Christopher Agam Agara, a philanthropist that don’t want to be heard. He is hereby accepted, adopted for the position of a Senate at the National Assembly for Cross River central senatorial district”.

On his part, Barrister Chris Agara thanked the Obubra people for choosing him to lead them, as he urged them to register and get their Permanent Voters’ Card (PVCs) which he said is the only tool that can take him there.

He placed Agriculture as his priority, saying he will make sure every aspect of the sector is tapped and developed, urging every youths and the Elites to bask into the field.

His words, “Before now, the Mbembe man and Obubra man has been known to follow; We are known as followers. We are telling the world that Obubra man wants to be followed.How can we be the majority and the minority will be using us.We need some political advantage. The Obubra people have the strength and people that no other LGAs has.

“The voters registration is still ongoing. I urge everyone, youths, chiefs, mothers, to get their PVCs. It is the only strength we need. And as Mbembe son, I stand here today to lead. We must stop the situation where people stand to lead us. Thank you all for endorsing me, for I will never fail you”.

A youth and a Councillorship aspirant, Obedience Agama lauded Agara for his achievements as a business man. He said, “He used empowerment, job creation and expansion and of course he tagged his ambition ‘Back to Land’. According to him, Back to Land stands a simple understanding that the Central is big enough that the people who have left the Senatorial District can come back and exploit.