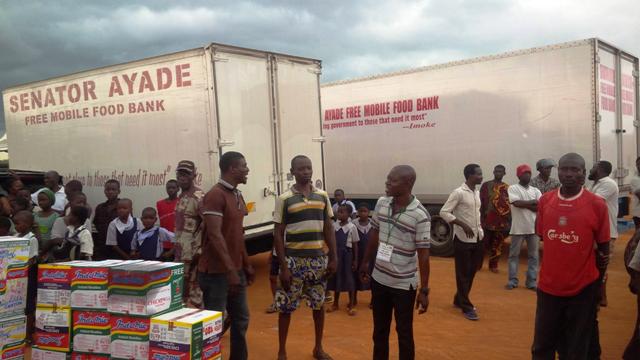 The Cross River State Government is subsidising prices of foodstuffs such as rice, tin tomatoes, groundnut oil and sweet corn by as much as 40 percent to enable the residents of the state celebrate the coming Christmas with joy.

The subsidy on the foodstuffs, which is already drawing traffic from even neighbouring states to the Tinapa Free Trade Zone where the foodstuffs are being sold, is the first of its kind in the state according to some residents.
‎
The State Commsioner for Finance who also doubles as the Managing Director of Tinapa Free Trade Zone, Asuquo Ekpeyong Jnr. said the subsidy on the foodstuffs was to enable citizens of the state celebrate the Christmas with their families despite the current economic condition in the country. ‎

“The Governor, Senator Ben Ayade decided to subsidize the cost of food stuff in this yuletide season to enable the people of Cross River State celebrate with their families whether they are indigents or not.

“We reduced the cost, working with the operators by paying off some of the cost of the goods up to 40 percent .

“We know that people will rush for it because of the present economic realities and we have provided for the required stocks that will cater to the needs of the estimated population of the people living in the state.”

On why the government decided to use Tinapa as the selling point, Ekpeyong said; “We are doing a double bottom approach method by providing for the welfare of the people of Cross River State and at the same time driving traffic to Tinapa for the retail sales.

“The Governor has been working hard with the management of the Nigeria Customs Service over the last one year to try and see how to revive trade in Tinapa and we have gotten to certain level in the commercial sales but that of retail sales is still lagging behind. So we are using the subsidy on the food items to attract traffic into Tinapa and will last till early January 2017.”

Some of the residents who went to buy the food stuffs at Tinapa also expressed delight at the gesture by government.

Also a pack of tin tomatoes that sells for N9,000 in the market is being sold at N6000 in Tinapa.