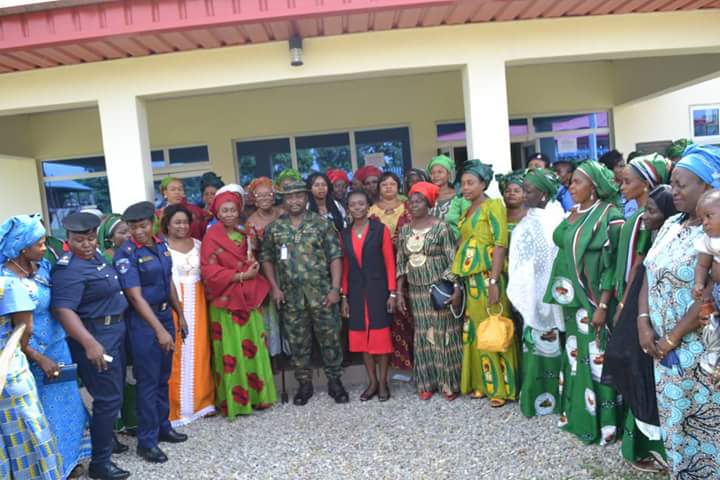 Capt. J. E. Offiong (rtd) Chairman of Council, the Nigerian Legion donated two (2) garri processing equipment and one grinding machine to CLICE Foundation to support the Barracks Women Economic Empowerment Programme (BWEEP).
International Women’s Day is a day set aside by the United Nations to celebrate and promote women’s achievements the world over in all spheres of human endeavour and also to draw attention to challenges confronting them in their various environment, with a view to improving their status and well-being in the society.

This year’s commemoration of the day by CLICE Foundation in partnership with NAOWA was indeed glamorous and elaborate, as it was well attended by individuals, groups, CSOs, NGOs, and all military and paramilitary agencies in Cross River State  among whom were, Naval Officers’ Wives Association (NOWA), Immigration Officers’ Wives Association(IMMOWA), Police Officers’ Wives Association(POWA), Prison Officers’ Wives Association(PROWA), Road Safety Officers’ Wives Association(ROSOWA), the Nigerian Legion, NDLEA, NSCDC, DSS, Nigerian Custom Service Nigerian Air Force and a representative from the United Nations, Yacine Fall.
In her brief, the coordinator, NAOWA, 13 Brigade Chapter, Calabar, Mrs Maimuna Isa, who is also wife of the Brigade commander, represented by the assistant coordinator, Mrs Juliet Nzan, welcomed guests and participants, as she described 2018 International Women’s Day theme as apt and timely, in view of contemporary challenges confronting women.
”This year’s theme can be described as apt and timely, considering the obvious difficulties women the world over are facing. From the trafficking of women and under aged children; unfortunate kidnapping of over 200 girls in the north east. The female gender is facing serious threat. Domestic violence against women has risen unprecedentedly.” she stated. Mrs Isa concluded by pledging her continuous support to activities and programmes that will uplift the standard and well-being of women in the barracks.
Earlier in her opening remark, the founder, CLICE Foundation, Ms Comfort Onyaga, expressed appreciation to individuals, groups and associations who have honoured invitation to attend the event marking 2018 International Women’s Day, adding that as someone who has experienced life in the barracks, she understands the plight of women who live in the barracks, hence, her resolve to take this year Women’s Day celebration to the barracks, with a view to changing the narratives. Recounting her experience while she was in the Barracks, she noted how difficult it was for women who were her neighbours then to cater and support their families, especially when their husbands were away on long duty calls outside the country. This experience, she added, informs her decision to embark upon Barracks Women Economic Empowerment Program(BWEEP), to practically equip the women with skills to enable them venture into agripreneurship as a means to support themselves and families while also improving their livelihood which is in line with one of the aims and objectives of CLICE Foundation.
A resource person, Mrs Ann Mesembe, who is the coordinator, American Corner, spoke on the topic, ‘Rural and Urban Activists- Transforming Women’s lives’ as she harped on gender parity, explaining that gender parity seeks to actualize equal opportunities for both men and women in political, economic, social and cultural endeavours.
Describing women as home makers, the resource person maintained that women are the nurturers of the family and by extension, the society at large.
Mrs Mesembe urged women to be resourceful and work hard to achieve their economic, political, social and cultural goals, even as she posited that women comprise 43% of the world’s agricultural labour force. She however regretted that despite the large involvement of women in the agricultural sector, they are still not recognized.
In achieving career success, Mrs Ann Mesembe advised women to develop passion for whatever they wish to do and involve their husbands in business or career planning.
Delivering her speech, the guest speaker and former registrar of the University of Calabar, Dr(Mrs) Julia Omang, observed that UN Women’s Day is unique, going by the fact that there is no such day set aside for the male counterpart. She stated that the day is mark to celebrate women who have achieved greatness in their chosen career through dint of hardwork, perseverance and commitment. She therefore called on women to distinguished themselves in whatever endeavour they  pursue in life, urging them to always be diligent and hardworking.
The scholar reminded women that men are still the head of the family, and as such, should be given their due respect in line with Biblical injunction. She described women as heart of the family, advising them to be alive to their responsibilities.
She however expressed disappointment over the inability of nowadays children to speak their mother tongue. The former registrar charged women to rise to the occasion by urgently addressing this cultural mishap.
The event culminated in the unveiling of Barracks Women Economic Empowerment Program(BWEEP) by the programme Director  of CLICE Foundation, Dr Owai Promise, and live demonstration of fish processing, using the MADE facilitated  250 capacity processing equipment donated by the commander, 13 Brigade Commander Calabar.
As part of the BWEEP, CLICE Foundation will be taking the women through entrepreneurial and Business enlightenment training, and afterwards, set up cluster farm in different value chain such as mushroom farming, fish processing, cassava farming and vegetable for the women.