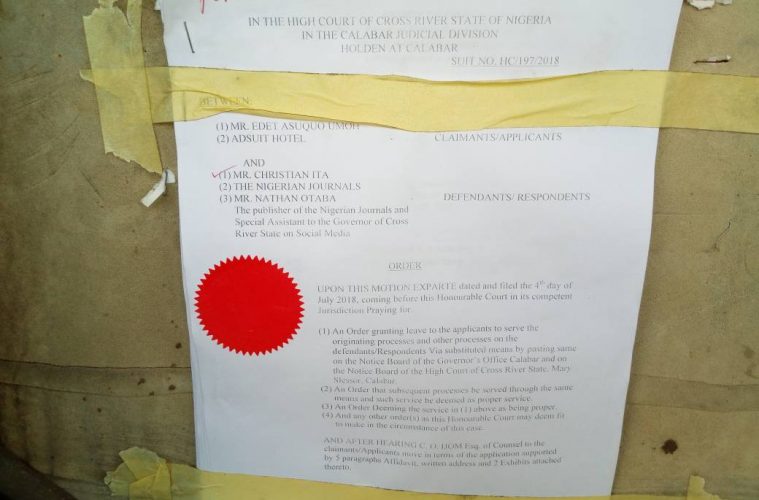 A state High Court sitting in Calabar has granted an order to serve the originating processes and other processes of the court on the Chief Press Secretary to Governor Ben Ayade, Mr. Christian Ita and the publisher of an online news platform, The Nigerian Journal, Mr. Nathan Otaba over a case of defamation brought before it.

This was made known by a notice pasted on the notice board of the Governor’s office and other public notice in Calabar last week. It is alleged that the court granted substituted service on Mr. Ita and others through public notices because it was almost impossible to serve him the court order, with Mr. Ita instructing his staff and subordinate both at home and at the office to refuse any court documents.

According to information, The Claimant, Mr. Edet Asuquo, owner of Adsuit Hotel Calabar is dragging Mr. Christian Ita and Mr. Nathan Otaba to court over series of defamatory publications on The Nigeria Journal with the title: Investigation Adsuit Hotel Owner Behind Ethnic Cleansing in New Netim in Cross River.

Accordingly, The Claimant, Mr. Asuquo has demanded the sum of 500,000,000.00 (Five Hundred Million Naira) only as aggravated damages for libel.

However, information reaching us from the Chief Press Secretary’s office reveals that the case of defamation against the Mr. Ita was struck out of court in April this year.