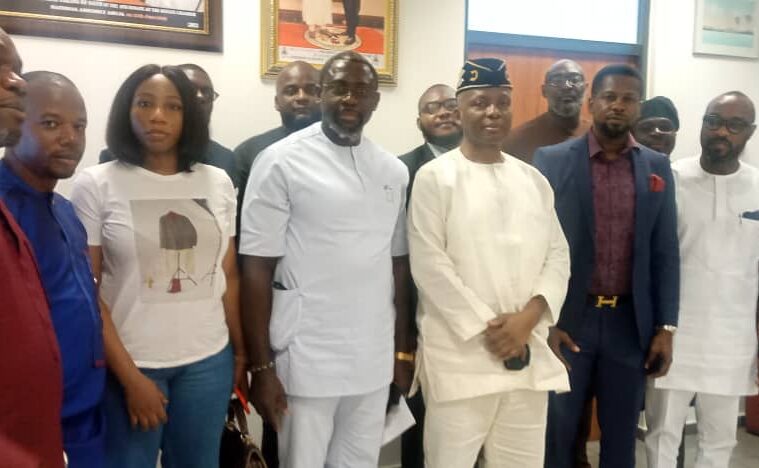 A group known as Cross River Southern Senatorial District Assembly has condemned the vandalization of public and private properties that took place in Calabar, capital city of Cross River State during the ENDSARS protests. The group opined that the protest was hijacked by hoodlums who wreaked havoc on public and private properties resulting in wanton destruction of the life work of ordinary citizens and political figures. The group made their stand known during a courtesy call on some of the affected victims of the vandalization that took place between 23rd and 25th October 2020.

According to Mr. John Offiong, Coordinator of the group, Calabar that used to be the most peaceful state in Nigeria and a safe haven, a rest place for Nigerians has now become a den for thieves and criminals who have had a field day with their heinous activities. He lamented a situation where kidnappings, cultism and other forms of criminality have gone unchecked in the state.

Offiong informed that the group also used the opportunity to share in the pains of the affected victims of the vandalization and looting that took place, as it is positioned to ensure such level of rascality and unpatriotic acts does not repeat itself in the state.

“The essence of the visit was to commiserate with those affected by the ugly incidents of October 23 through 25th while discussing how we can rebuild Cross River State and set modalities in place for speedy development. Truth be told what happened in Calabar some weeks ago could have been avoided if we had a proactive government who cared about the people’s welfare.” Offiong informed.

In his comment, the Commissioner for Culture and Tourism Development, Cross River State, Mr. Eric Anderson who is a member of the group noted that the situation in the state is unfortunate and embarrassing that young persons could allow themselves to be used to destroy their future.

Eric lamented the level of destruction, vowing to stand by Cross River Southern Senatorial District Assembly as it seeks to restore the battered image of Cross River State.

In their separate responses, those visited called for a proactive approach to what has befallen the state while calling on the South and Cross Riverians to be strong and demand for adequate security architecture and good governance in the state. Emphatically, Rt. Hon. Essien Ayi insisted the Obong needs to call for an enlarged Efik stakeholders meeting to address the issues at hand.

In comparison the level of insecurity we have in Calabar today is far higher than what we had during the Civil War. Then one can walk through the streets of Calabar even by 2am and you get home safe without a being hurt, but today you can’t dare walk in town by 7pm and you are safe.

I have spent my entire 42 years as a lawyer in Calabar, I am locally breed. No hoodlum can chase me out of Calabar. The people have treated me well. I prospered in Calabar.

So for me what has happened its not about Victor Ndoma-Egba but what Calabar has lost. Calabar has lost its true Essence. We grew up to know civil servant wanting to build his retirement home in Calabar because of the peaceful and serene nature of the city.

But we can still recreate what we have lost if we have people like you who will be courageous enough to weather the storms.

What happened doesn’t really bother me but my concern is the effect it has had on the state.

I am happy that we have people like you coming out to take responsibility for nation building.

I will advise that you develop a vision and a blueprint for the group and the state. How do we see our state in the next 5 years. Criticizing is not just enough but let’s start thinking of what to do in making the state better.

We must first begin with a vision from the start, aspiring for political office is secondary. The acquisition of political power is a platform to effect change or implement the vision.

I wonder why nobody from the south is supporting the Obong’s statement rather its only the likes of Ray Morphy and Cletus Ebum that are speaking.

Devolution of power and  security should be the first port of call if we must get it right as a state and government.

Let’s begin Rebuilding our state through a truth telling process.

I don’t think any true Efik son would have done what has happened. We really need to assist Calabar deal with these issues.

I fear for other elite gentle ones.

I don’t know how proactive the Leadership in the state is?

I am delighted that young persons from the south have woken up, it’s a good thing because some of us will get involved. We will put our hands together with you.

I am glad that at last a group like this has emerged, this initiative is noble. What has happened is just a lesson for us all, especially those in Government.

I am also glad that you are young persons. After consulting round the state I discovered that the number of persons who carried out the invasion didn’t represent the majority of our youths. But if nothing is done to forestall such act, the number of young persons on the street will triple if there’s another trigger.

I will be 60 by next year, I started this game in my 30’s what that means is that I have been here for about 30 years.

You guys have advantage over us because you have technology, and our mistakes to learn from as well as our guidance and advice.

I pray this isn’t just a one off thing, you’ll need to come together as one to speak a different language from us and engage as much as possible down to the grassroots. You can counter the narrative. The narrative of CRS has been bad. You have all it takes to effect a change in Cross River.

As long as I am concerned, the south is the worst hit in what has happened. I am ready to support you people achieve your aims if only you won’t back out when the heat start coming.