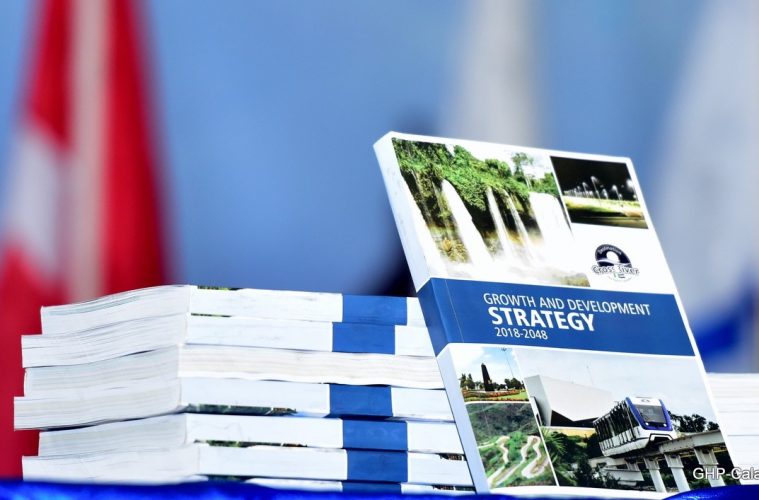 The Cross River State Governor, Prof. Ben Ayade, has commissioned a 30-year Growth and Development Strategy (GDS) for the state.

Governor Ayade, who was represented by the Secretary to the State Government, Barrister Tina Banku Agbor, also stated that the GDS plan is in keeping faith with the collective vision of “making Cross River a prosperous Nigerian State with healthy and well educated citizens,
living in harmony with people and nature, pursuing inclusive and sustainable growth, moderated by good governance.”

At the official launching, which took place at the on-going International Collaboration and Investors Summit, holding at the Calabar International Convention Centre (CICC), Calabar, the governor said GDS is a fulfillment of his administration’s promise of inclusive development programmes, consistent with the ideals of the Universal Declaration on Sustainable Development Goals (SDGs).

The Governor further pointed out that his administration’s goals and prosperity aspiration of deepening the state economy from the current 2.7 trillion Naira level to 9.6 trillion Naira (GDP) by the close of his term in 2023, is captured in the sector-based GDS in a manner that no-one-is-left-behind.

He commended the State Planning Commission, the State Economic Management Team, Ministries, Departments and Agencies in the State, Civil Society Organizations, Non-Governmental Organization, the organized private sector, and specially, the Calabar Chamber of Commerce, professional groups and members of the public for supporting the process.

Ayode particularly thanked CUSO International for sponsoring the State-wide consultation and the Foundation for Partnership Initiatives in the Niger Delta for not only sponsoring the GDS from roots to branch, but creating demonstration effects that are catalytic to the achievement of the vision.

The Governor recalled the development strides of his administration and promised to do more in creating a conducive business environment for investors.

He said his admin-istration’s friendly collaboration with the Federal Government has fast-tracked the development processes for such signature projects as the Bakassi Deep Seaport and the 275km Super Highway, while expressing delight in the achievement of the Outline Business Case for the Seaport.

Governor Ayade reiterated his commitment to the GAS and its review every five years to adequately capture the spirit of the times, over the medium and long haul of the plan period.

He expressed hope for the respective break-out sessions with value champions at the Summit and do justice to the integrity of the respective opportunity lines, adding that, he looks forward to receiving regular updates on the footfalls of the Summit,
implementation of the GDS and results including legislative protection of the Strategy.

In separate congratulatory messages, the Ambassador of the Republic of South Korea to Nigeria, Major-General Lee In-Tae and his Norwegian counterpart, H.E. Jens-Petter Kjemprud, spoke in glowing terms of Governor Ayade’s deep vision for the State and the rippling effect of his industrialization drive towards economic prosperity of the people.
Presenting the Growth and Development Strategy, the Chief Economic Adviser to the Governor, Dr. Francis Ntamu said the State Government has deliberately articulated and implemented investor-friendly policies and measures designed to attract investors into the state.

One of such policies, Dr. Ntamu stated that “if one is to do due diligence and sets up a factory in a matter of weeks, showing capacity to employ between 20-30 Cross Riverians, will be automatically granted a certificate of occupancy at the Ayade Industrial Park.