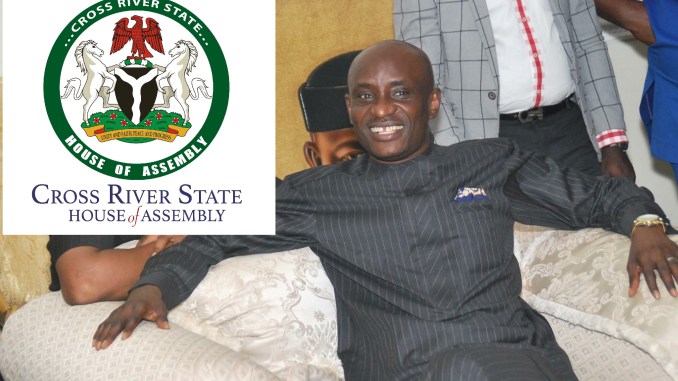 The Speaker of the Cross River State House of Assembly, Rt. Hon. John Gaul Lebo has been named the Best Speaker of the year 2017 by Institute of Democratic Administration of Nigeria.

Lebo was conferred with the Award slated for February 10, 2018 as announced by the Twitter handle of the Cross River State House of Assembly, @CRS_HOA, one of the most active social profile of the Governor Ben Ayade led Administration.

The tweet reads, “The Speaker Cross River State House of Assembly Rt. Hon. @gaullebo has been conferred with the Award of Best Speaker for the year 2017 by Institute of Democratic Administration, Nigeria. It is slated for 10th February 2018”.

Hon. John Gaul has led the 8th Assembly to a lofty height, registering several bills and laws which Cross Riverians are benefiting from today. One of such is that of the Cross River State Primary Health Care Development Agency, led by the Director General, Dr. Betta Edu. Another is the Cross River Health Insurance Scheme also known as the AyadeCare; a system where you pay one thousand Naira (N1,000) only to receive quality healthcare services in the state. Gaul was also the Pioneer of the 1999 federal constitution amendment – judging from his statement during the 2017 Dialogue with Agba Jalingo Town Hall meeting at Transcorp Hotels, Calabar. He said, “The State Houses of Assembly needs a financial autonomy; the Local Government needs a financial autonomy and the State Government also needs financial independence”. Today, the constitution is undergoing amendments, and several of his points are being voted for.

He truly deserves the honours. Congratulations, Honourable Speaker! Higher you we pray.