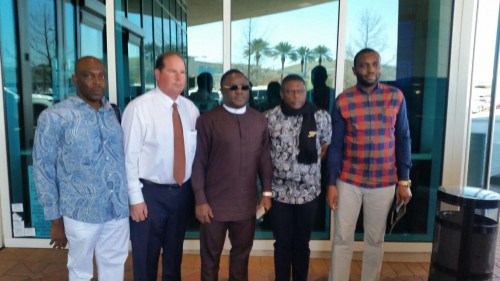 The dream of Governor Ben Ayade of Cross River State to build three new cities in the three senatorial district of the state got a major boast in far away United States of American when the state signed a Memorandum of Understanding (MoU) with an American firm, DXB Group Incorporated to build a new city to be known as Calas Vegas.

Calas Vegas is the new city planned for the southern senatorial district. It is to be sited in Calabar.

Commissioner for New Cities Development, Barr. George Ekpungu signed the MoU on behalf of the state while the Managing Director of DXB Group Incorporated, David Binton signed on behalf of his company.

The event was witnessed by Governor Ayade, the chairman of New Cities Development Board, Mr. K.J. Jeddy-Agba and the secretary of the board, Mr. David Attoe.

In line with the MoU, DXB Group is expected to develop the city by building structures such as casinos, a hotel, malls and upscale residential apartments. The development is to be done under a Public Private Partnership (PPP) regime.

Apart from signing the MoU, the governor and his entourage inspected some estates and districts in the United State with a view to determining the concept that will best suit the proposed new cities.

The firm is to design the masterplan for the new cities