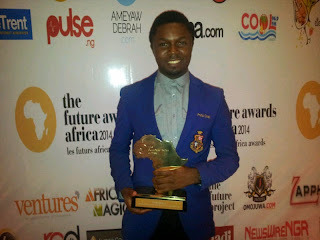 Education campaigner and founder of 1 GAME Campaign Philip Obaji has been awarded the prestigious Future Africa Awards Prize In Education 2014 in a ceremony in Lagos. The event took place on Sunday 7th of December where Nigeria's president, Goodluck Jonathan, represented by Minister of Youth Development, Bonnie Haruna and Rivers State Governor, Rotimi Amaechi spoke, as well as Channels Television Chairman, John Momoh who presented the award to Obaji.

Born on 8 August 1985 in the town of Ogoja in the southern region of Nigeria, Obaji is known for his activism for rights to education for Children, especially in northeastern Nigeria, where Boko Haram forbids western education and attacks those in support of it. After many years away from his place of birth, he took a trip back to Ogoja in 2009, and was greeted on arrival by tens of street children who had travelled in from north-eastern Nigeria in search of alms, but whom he thought ought to have been in school. This led him into action. In 2010, Obaji founded 1 GAME, an advocacy and campaigning organization that fights for the right to education for disadvantaged children, especially street children in northern Nigeria popularly called Almajiris.

In September 2013, Obaji initiated an online campaign, calling on Governor Kashim Shettima to remodel the Almajiri system of education in northeastern Nigeria's Borno State in-line with western-style education. Because of his efforts on education in the region, Obaji rose to prominence, giving interviews in print and on television, and he was nominated for the Communication for Social Change Award, administered by Centre for Communication and Social Change at the School of Journalism and Communication, within The University of Queensland, Brisbane, Australia.

As well as the work Obaji does for 1 GAME Campaign, he serves as Global Youth Ambassador for A World At School— a new digital mobilization initiative working towards achieving global education. Obaji is also a member of the Cross River State Football Association.

The Future Africa Awards celebrate young Africans between the ages of 18 and 31, who have made outstanding achievement in the year under consideration.See Photos from the event here:
www.stelladimokokorkus.com/2014/12/the-future-awards-in-beautiful-pics.html?m=1