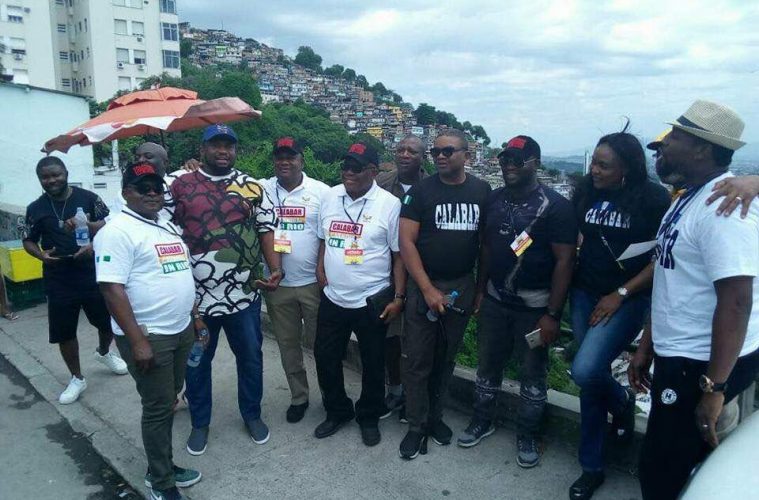 As part of the effort to improve the organisation and revenue generation for Calabar Carnival popularly known as the Africa Biggest Street Party, Cross River State Governor, Prof. Ben Ayade has sent a Contingent comprise of the leaders of the five competing bands to fully and other stakeholders to participate in the 2018 edition of the Rio Carnival in Brazil.

The Contingent led by the Commissioner for Culture and Tourism Hon Eric Anderson, Head of the State Event Management and Carnival Commission are already in Rio, in preparation for the annual event.

This is the first time Cross River State will be participating in the World Biggest Street Party which serves as big revenue generation to the government of Brazil.

Speaking on the State Contingent readiness for the Carnival at Galeo International Airport Rio, Brazil, Commissioner for Culture and Tourism, Eric Anderson said, the team is excited to be part of the world carnival Event.

He said the delegation from Cross River came to understudy how Rio Carnival became the world best in terms of organisation, Orderliness, Logistics and most importantly, revenue generation.

“We are excited to be part of the Rio Carnival in 2018 because it is the biggest in the world and as a Tourism state that take carnival as it’s flagship, we are going to learn from the world best. “Our aim is to see how to better Calabar Carnival in the areas of organisation, Promotion, Logistics and revenue generation, don’t forget this is the first time Cross River is participating in this Carnival and it is the initiative of his Excellency the Governor but facilitate by the Ministry of Culture and Tourism under my supervision.

“Carnival Calabar after this trip will not be the same again, because for us our visit is a peer review to see what they are doing good and infuse into what we are doing ,this is why all the band leaders and major stakeholders in management and organisation of the carnival Calabar are here”he said.

The Commissioner explained further that by 2019 edition, the five competing bands and governors band will be participating fully to give Rio a taste of Cross River.

The Executive Secretary, Cross River Carnival Commission, Mr Austine Cobham while commending the Governor for fulfilling his promise to sponsor the band leaders to Rio said, “we are here to understand what the world best is doing right that Calabar need to emulate from mustering, adjudication and crowd Control and management.

“The visit is going to be the best for us as a commission by the time will present our findings and report to His Excellency, the governor.